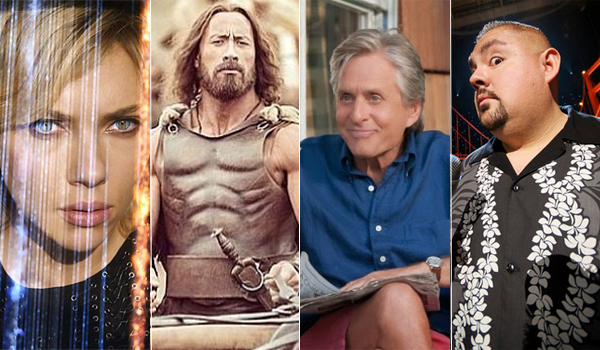 BoxOffice takes a look at the final weekend of July with four new major releases.

- Scarlett Johansson's popularity has skyrocketed among general audiences lately thanks to her multiple turns in Marvel's movies.
- Morgan Freeman's presence is an added bonus for moviegoers.
- Writer/director Luc Besson has a strong resume in the action genre, including Le Femme Nikita, The Professional, and The Fifth Element. He also produced Taken.
- Facebook activity has been phenomenal for an original movie leading up to release, boasting nearly 1 million fans already. Twitter and Flixster buzz have also impressed.
- The slow summer box office leaves an original flick like this wide open for a breakout, especially one appealing well to both men and women.

- Despite acclaim among movie fans, Besson's previous directorial efforts haven't been box office smashes.
- The slow summer box office could, on the contrary, continue its slow trend until Marvel releases Guardians of the Galaxy next week.
- Competition from Dwayne Johnson's Hercules could hinder a breakout for Lucy. Moviegoers have a big choice between the two stars.

- Dwayne Johnson has become a consistent box office draw in recent years, driven by his addition to the Fast & Furious franchise in 2011.
- Twitter and Flixster activity have been fairly strong.
- The source material is popular among its fans, while the Hercules legend itself gives the film plenty of brand recognition.

- Fan buzz has been skewing negative, with an outright call for a boycott of the film by popular graphic novelist Alan Moore.
- Social media activity has generally fallen behind that of Lucy leading up to release.
- On a weekend with a strong option for both men and women in Lucy, this could turn out to be a guys-only flick.

And So It Goes

- Director Rob Reiner should bring out his fan faithful for this lower profile release.
- Stars Michael Douglas and Diane Keaton will appeal well to older crowds.

- Reiner's last few films haven't made much of a dent at the box office.
- On a busy weekend, the film's potential audience is very limited.

- Gabriel Iglesias (lovingly nicknamed "Fluffy") has become of the most popular comedians in the world through his successful stand-up tours and specials.
- Iglesias' multi-cultural appeal is a major advantage for his first feature movie.

- Even Kevin Hart took time to build his audience in movie theaters, so the same should be expected for Iglesias.
- The limited release will likely hold back breakout grosses.

Tags: Lucy, Hercules, And So It Goes, The Fluffy Movie, predictions