Weekend Forecast: 'Guardians of the Galaxy' & 'Get On Up' 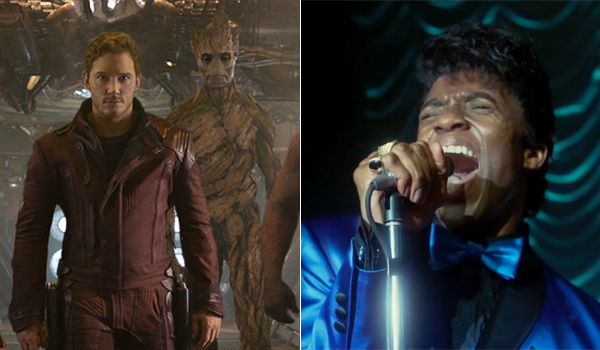 The final month of summer kicks off this weekend with Guardians of the Galaxy and Get On Up.

Guardians of the Galaxy

- Marvel Studios' box office clout has grown significantly over the past two years since The Avengers' success.
- The off-beat humor and eclectic visuals are drawing moviegoers' attention.
- Online buzz has been impressive since the first trailer's release earlier this year, building to one of the most positively trending films of the year on Twitter and Flixster especially.
- The lack of any major blockbusters this summer has left a certain amount of demand left up for grabs.
- Early reviews have been ecstatic.
- The ensemble cast of up-and-coming names (Chris Pratt), new stars (Zoe Saldana), and crowd favorites (Vin Diesel and Bradley Cooper).

- Will the quirk of the film limit it to a niche audience instead of a large mainstream one?
- August films aren't typically known for breaking out to blockbuster numbers, although this looks to change here.

- Legendary singer James Brown boasts multi-generational fans.
- Adults looking for non-popcorn fare could be attracted to this one.
- Comparable past August releases like The Help and Lee Daniels' The Butler found a great deal of success with their late summer counter-programming.

- Online buzz has noticeably lacking, even when compared to 42 and Lee Daniels' The Butler.
- Opening against Guardians won't do it any favors with the young adult crowd.
- Will audiences buy into star Chadwick Boseman as James Brown so soon after his portrayal of Jackie Robinson in 42?

Tags: Get On Up, Guardians of the Galaxy, predictions