Weekend Forecast: 'After Earth' & 'Now You See Me' 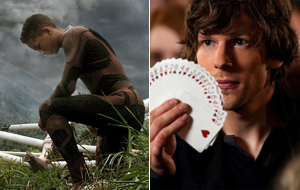 On the heels of a record-breaking Memorial Day frame, two new releases enter the market this weekend: After Earth and Now You See Me.

- The combined appeal of Will Smith and his son, Jaden, could help target both older and younger viewers.
- The sci-fi genre has become more accepted by general moviegoers in recent years.
- Twitter, Facebook, and Flixster activity compare well against this year's Oblivion.

- For a would-be summer blockbuster featuring Will Smith, buzz is noticeably lacking.
- Early negative reviews could curb audience desire to catch the film after a busy holiday weekend.
- The over-crowded marketplace with already well-received films in play (Fast & Furious 6 and Star Trek Into Darkness).
- As the third sci-fi flick to open in the past month, are audiences over-exposed to the genre?
- M. Night Shyamalan's directorial efforts have been at the center of criticism for almost nine years. However, his name has been mostly absent from marketing.

Now You See Me

- The ensemble cast featuring Jesse Eisenberg, Michael Caine, and Morgan Freeman could help the film stand out among both teens and adults.
- 2008's 21 opened well with a similar premise, on its way to becoming a sleeper hit.
- 2003's The Italian Job opened with nearly $20 million (before inflation) on the same weekend following a similarly busy holiday.
- Flixster and Twitter activity are encouraging.

- Following a busy holiday frame with a still-crowded marketplace won't be easy and could make it more about the legs for this.
- Movies about magic have hard a time finding success with mainstream crowds.

Our final domestic gross forecasts are $100 million for After Earth and $72 million for Now You See Me.

Check out our forecast for these films and the remainder of the weekend's top 10 in the table below.

Tags: After Earth, Now You See Me