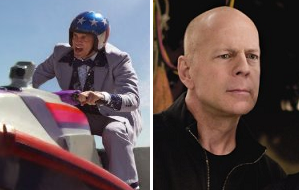 This week, we've added two new films to the Long Range Forecast. Jackass 3D and Red are both set to hit theaters on October 15.

Just as Oscar season is beginning to ramp up, the Jackass crew will inject a healthy dose of sick stunts, practical jokes and other mischievous behavior into multiplexes across the country. Even though it's been five years since the second Jackass film, the new installment promises to be a huge hit. The initial wave of responses to the trailer were overwhelming positive. Curiosity will get the best of many moviegoers. The added ticket price from 3D will also help to appease any drop off in fans from the last installment.

Red features one of the best ensemble casts of the year. Bruce Willis is backed up by Morgan Freeman, Helen Mirren and Mary Louise Parker, among others. Hopefully with a cast like that Summit can lose the stigma that they are only capable of opening films with the word Twilight in the title.

Check out our predictions for these films as well as other in table below.