Weekly Anticipation Index: 'The Princess and the Frog' and 'Invictus'

A new animated film from Disney and a drama from Clint Eastwood will try to rake in some cash this December. 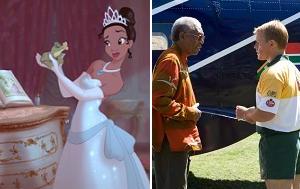 This week, we've added two new films to the Anticipation Index. The Princess and the Frog and Invictus will both go wide on December 11.

The Princess and the Frog in one of three major Disney releases this fall. The Mouse House will also put out A Christmas Carol on November 6 and Old Dogs on November 25. The animated flick represents a minor gamble for Disney, considering that it marks a return to traditional animation. Younger moviegoers who were raised on computer-animated flick may not respond immediately to The Princess and the Frog. Still, if any studio can make traditional animation commercially viable again it's Disney.

Invictus marks Clint Eastwood's latest directorial effort. Gran Torino proved that audiences have developed a strong allegiance to Eastwood's work, and the fact that Invictus stars Morgan Freeman and Matt Damon will only add to that allegiance. Oscar buzz is sure to follow the Warner Bros. as well, which means that it could quickly become one of the season's must-see films.

Check out our predictions for these new movies as well as others in the table below.