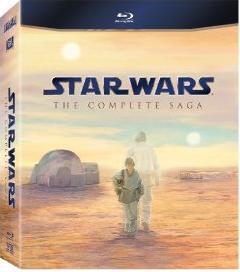 Star Wars: The Complete Saga promises to divide fans of the space opera all over again.

The franchise's long-awaited Blu-ray debut offers all the official Star Wars films in High-def, but George Lucas and co. couldn't resist a few more nips and tucks sure to send bloggers scurrying to their Mountain Dew-stained keyboards.

Let the debate amongst hardcore fans rage on. Everyone else will embrace the set‘s crisp, re-mastered epics and gobble up deleted sequences not seen for decades.

The set includes the six "Star Wars" films (the ‘Special Edition‘ versions of the initial three pictures), two disks dripping with extras and a final disk which gathers seven documentaries plus more than 90 minutes of "Star Wars" spoofs. Who knew Lucas had a sense of humor?

No, the new package doesn't have an option to erase Jar Jar Binks from The Phantom Menace or give life to the wooden dialogue spouted by Natalie Portman and Hayden Christensen in the three prequels. But the films look gorgeous in the Blu-ray format, with even 1977's Star Wars appearing as vibrant as it did back during its initial release.

The Empire Strikes Back remains the series' high point, a complicated bridge between the masterful Episode IV (A New Hope) and Return of the Jedi, the film which first hinted at Lucas's diminishing creative powers. The prequels never matched the original trilogy in terms of quality and fan loyalty, but Revenge of the Sith comes the closest to re-capturing that old magic.

The newly scrubbed films offer a few more tweaks to the existing canon, from minor notes (look, the Ewoks now blink!) to a new affront to the faithful - Darth Vader cries "Nooooo!" as he dispatches the Emperor at the end of Return of the Jedi.

Purists will cry foul, but the altered moments are easily forgiven within the context of the saga.

The Blu-ray extras, cobbled together on disks seven and eight, could have been presented in a more digestible fashion. The package arranges the content by location - Tatooine, Dagobah and Naboo, for example. It's a bit confusing, but the menu screens are sharp and flow easily.

Each film comes with a busy commentary track featuring Lucas and most of the key members from the saga, although many of their contributions were cobbled from previous sources and not specifically for this box set.

The final disc includes such goodies as "A Conversation with the Masters," a look at The Empire Strikes Back 30 years later teeming with information about the dynamic between Lucas and director Irvin Kershner. "The Making of Star Wars," co-hosted by C3P0 and R2 D2 brings a touch of kitsch, although the set wisely leaves out the awful "Star Wars Holiday Special" and the "Clone Wars" animated film from 2008.

The 45 deleted/extended scenes offer a grab bag of scratchy bits rescued from the film vault to segments which never made it close to the final cut. They're fascinating all the same, glimpses into the mind of Lucas's creative process and a credit to him for cutting them in the first place. Very few moments cry out to be re-inserted into the saga. But their flaws illuminate how much went right with the greatest space franchise in film history. Consider an extended argument between Leia (Carrie Fisher) and Han Solo (Harrison Ford) early in The Empire Strikes Back. The finished film wraps the clash in a satisfying fashion, while the cut version lets it drag on to an uncomfortable length.

The Star Wars posters set a gloriously high standard for film marketing, their collage visuals part of a film art that appears in serious decline. The illustrations on the "Complete Saga" case and booklet, in comparison, resembles a talented fan's handiwork more than a serious piece of art.

It's a small quibble on a set sure to satisfy even those who will never forgive Lucas for making Greedo fire first at Han Solo in that famous Star Wars cantina exchange.