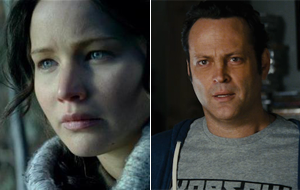 - The first film was a breakout phenomenon, grossing $152.5 million on opening weekend and $408 million domestically.
- Star Jennifer Lawrence's popularity has only increased in the last year and a half, largely due to her Oscar-winning role in Silver Linings Playbook following The Hunger Games.
- The fan base of the books has continued to grow since last year.
- This installment gains the benefit of an IMAX run from day one.
- Twitter, Flixster, and Facebook activity have been exceptional over the last few weeks.

- The original film was in new territory for a franchise-starter performing at the box office levels that it did.
- With Thor: The Dark World and The Best Man Holiday pulling respectively strong numbers, competition is stiffer for Catching Fire than it was for its predecessor.
- The young female-heavy appeal of the franchise is somewhat similar to that of Harry Potter and, to a lesser extent, Twilight.
- Will curious non-fans show up on opening weekend again?

- Vince Vaughn has a core fan base that usually turns out for his movies.
- The counter-programming against Catching Fire could lure in older audiences looking for a comedy.

- Vaughn's recent track record has left much to be desired (The Internship, The Dilemma, The Watch).
- Online activity from Twitter, Flixster, and Facebook are underwhelming.
- Regardless of targeting a slightly different audience, competing with Catching Fire virtually eliminates the potential for female audiences to help turn this into a date night movie.

Check out our forecast for this weekend's top 11 in the table below.