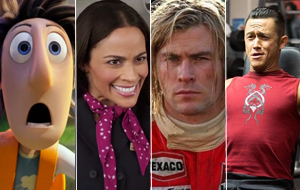 The box office gets an infusion of four new releases this weekend, offering something for almost everyone.

Cloudy with a Chance of Meatballs 2

- The original 2009 film won over kids and families alike, pulling in an impressive $124.9 million domestically.
- The lack of any animated films opening between August's Planes and November's Free Birds will be a huge advantage as Cloudy 2 targets a starved audience.
- Including the original, Sony's found a great deal of success with animated flicks released during this time of year--especially with last year's Hotel Transylvania and its $148.3 million take.
- Social network buzz for the sequel has been very positive over the last few weeks.

- Although Twitter, Facebook, and Flixster buzz are solid, they don't measure up to that of last summer's Despicable Me 2 or Monsters University. But does Cloudy 2 really need to?
- The four-year gap could be a bit too long as some kids that came out back then have grown up now.
- Sony's had a rough year in nearly every genre.

- Joseph Gordon-Levitt has become an increasingly prominent star thanks to his turns in Christopher Nolan's last two films, Looper, 50/50, and (500) Days of Summer.
- Gordon-Levitt's fans are interested in seeing his writing and directorial debut with this film.
- The film's marketing campaign has made strong attempts to pitch it as a romantic comedy, despite the somewhat divisive subject matter.
- Strong festival buzz and critical reactions have been in the film's favor for weeks now.

- A film centered on pornography is automatically going to put off some audiences, comedy or not.
- Opening against Rush could cause each film to cannibalize the other's potential young adult audience.
- Although his star is still increasing, Gordon-Levitt (nor Scarlett Johansson) is a guaranteed box office draw yet.

- Chris Hemsworth has become a bigger attraction thanks to the Avengers franchise and Snow White and the Huntsman.
- Ron Howard's popularity and history as a mainstream director could drive significant interest from adults.
- The film's strong debut in five theaters last weekend provides a good foundation for its wide opening.

- Formula 1 racing is far from a widely popular sport in North America.
- Opening against Don Jon could cause each film to cannibalize the other's potential young adult audience.
- Hemsworth is a bigger attraction, but his drawing ability in a non-visually driven drama hasn't been tested recently.

- Paula Patton has become a more recognizable actress thanks to 2011's Mission: Impossible - Ghost Protocol.
- Urban audiences haven't had much to choose from at cinemas lately.

- Opening in an estimated 1,800 theaters will prevent breakout potential.
- The crowded slate of new releases will leave this at the bottom of the priority list.

Check out our forecast for these openers and the remainder of this weekend's projected top 11 in the table below.