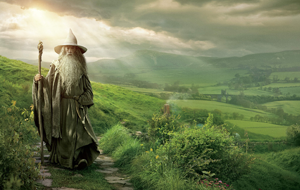 The Hobbit: An Unexpected Journey, the last of 2012's highly anticipated blockbusters, finally unleashes on theaters this weekend. After nine years of potent demand from fans, the first installment of the planned trilogy will be entering a relatively empty market space as the holdovers finally give way to a film that will interest audiences for the first time since Thanksgiving.

The Hobbit: An Unexpected Journey

- The Lord of the Rings trilogy brings in a lot of good will considering its massive commercial and Oscar success in the early 2000s.
- The marketing campaign has strongly penetrated various forms of media over the past two months and even dating back to the announcement teaser released in theaters one year ago.
- The Tolkien brand has remained a fixture of pop culture since the trilogy's release.
- Bringing back original cast members such as Ian McKellen provides the less initiated some familiarity left over from the trilogy. Peter Jackson's name also still carries some interest among audiences as well.
- The Hobbit, like its Rings counter-part, is one of the best selling novels of all-time and will carry with it the same Tolkien fan base that the trilogy did.
- Mainstream audiences have shown that they're hungry for event movies this holiday season, and repeatedly throughout 2012.
- Studios have largely avoided putting any big releases in the market throughout the first half of December, meaning no significant competition for the film this weekend.
- By that same token, families are looking for a movie like The Hobbit with Wreck-It Ralph having mostly played out and Rise of the Guardians disappointing.
- The lighter tone of the book, and presumably the film itself from audiences' points of view, will increase the already strong upfront appeal of the franchise to kids and families.
- The Return of the King, like its two predecessors, set the December opening weekend record in 2003 with $72.6 million and did so having lost demand on Friday-Sunday by opening on Wednesday. With nine years of ticket price inflation plus 3D and IMAX surcharges, it shouldn't be difficult for The Hobbit to re-claim the December record (currently held by I Am Legend with $77.2 million).
- As an adventure pic, the film is tailor-made for audiences still interested in 3D. Combined with the family appeal, 3D attendance could be strong and more in line with the levels of The Avengers rather than other recent blockbusters that saw declining 3D shares.
- Flixster activity has been strong for quite some time, boasting a 95% "want to see" score across nearly 143,000 voters.
- Though reviews suggest some concern, if general audiences approve of the film then holiday legs will still carry it far.

- Early reviews aren't nearly as supportive as they were for the Rings trilogy. Most audiences won't be paying to attention to them with a high profile film like this, so the question is will any of the online crowd and/or fans on the fence decide to wait until after the first weekend (or skip it all together)?
- Opening in December means that upfront demand could be lessened due to some audiences waiting for Christmas break. The result may be a smaller than expected opening with slightly more back-loading in the weeks ahead. A film of this magnitude in terms of anticipation has released in December since The Return of the King itself, so comparisons are tricky.
- Chief among the negative reviews are concerns over the high frame rate usage. Early opinions suggest this will matter less to younger audiences than older ones, but time will tell. Either way, the HFR locations only account for 10 percent of the theaters the film is opening in and moviegoers will have the option of seeing it in 2D or 24FPS 3D as well.
- Not carrying the Lord of the Rings name could mean lessened general audience interest for anyone not familiar with The Hobbit.
- Peter Jackson's King Kong didn't leave as big a mark on the box office as expected in 2005, while 2011's The Lovely Bones missed the mark completely. Will audiences be swayed by them?

Check out our predictions for The Hobbit: An Unexpected Journey and the rest of the top 10 for the weekend in the table below.

Tags: The Hobbit: An Unexpected Journey