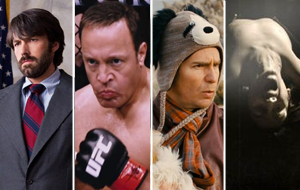 Five new films go into wide release this weekend as each one tries to capitalize on what appears to be a recovering box office market following the big openings of the past two weekends. Ben Affleck's Argo leads the crop this weekend, followed by Here Comes the Boom, Seven Psychopaths and Sinister.

Atlas Shrugged: Part II is also scheduled to hit theaters this weekend. You can find out prediction for the film in the table below.

The regular sales report for Fandango was not available at the time of publishing this article. We will update this post when the numbers are made available.

- Ben Affleck's directorial appeal is strong coming off The Town and Gone Baby Gone.
- Early Oscar buzz has been driving the film for the past month.
- Disappointing word of mouth for last week's Taken 2 could translate to a big drop for that film, and in turn, more audiences willing to give Argo a look.

- The "insider" Hollywood plot has historically proven to be a hard sell to widespread audiences.
-  Social media buzz has been moderate, but not outstanding. This looks like a long-term performer more than a big opener.

- Kevin James offers a recognizable brand for audiences looking for a straight-up comedy amid the other serious-leaning films out in the market right now.

- James didn't send Zookeeper to huge success last summer.
- Marketing for the film lacks some of the family angle that helped last year's Real Steel.
- The amount of family fare in the market right now (Hotel Transyvlania, Frankenweenie) plus the staggering amount of competition from new releases this weekend could put Boom at the bottom of the priority list for most moviegoers.

- Director Martin McDonagh started to make a name for himself with 2008's underground success, In Bruges.
- An ensemble cast of familiar faces plus the less-serious tone of the film could entice adults looking for both quality and laughs.

- The amount of competition in the market simply prevents a low-profile such as this from breaking out on opening weekend.
- Ditto for the out-of-left-field high concept.

- Social media buzz has been steadily building for the film over the past few weeks.
- Releasing one week ahead of Paranormal Activity 4 enables the film to preempt that film's demand among horror fans.
- Early reviews have been strong for the genre, potentially giving that social media generation of viewers the extra push to see it this weekend. This is a dark horse contender to top the openers this weekend, if not Taken 2 itself.

- The R rating cuts out any teen audience that helped drive big openings for The Devil Inside and The Woman In Black earlier this year.
- Releasing one week ahead of Paranormal Activity 4 could easily be just as much of a disadvantage as it is an advantage.