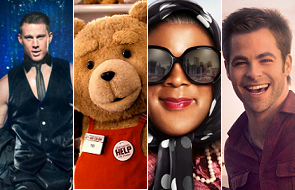 Brave should have no problem fending off male strippers and talking teddy bears at the box office this coming weekend.

When it comes to family entertainment, the Disney/Pixar combo stands ahead of the rest. Brave is shaping up to be yet another steady earner in the tradition of Cars, WALL-E and Up. The animated flick currently boasts a healthy 85% combined approval rating from more than 73,000 Flixster users—a clear sign that word of mouth is strong enough to propel it to a second #1 finish.

As of 4 p.m. PT, Fandango reports that Brave accounts for 11% of daily sales.

Look for Brave to take in $33 million during its sophomore frame.

Magic Mike is shaping up to do some serious damage, and its breakout potential means that a #1 finish this weekend is a real possibility. The male-stripper drama will do incredibly well with female moviegoers and terribly among men—this is no four-quadrant hit. Magic Mike appeals to the same moviegoers who turned Bridesmaids into a $288.8 million worldwide sensation. Critics have been kind to Magic Mike, but they also caution that there's more depth to it than the ads let on. If the film isn't as fun as advertised, then that could hurt its staying power in the weeks to come.

Fandango reports that Magic Mike leads with an impressive 52% of daily sales.

Magic Mike should earn $29 million from more than 2,900 locations during its debut frame.

There's also plenty of room this weekend for Ted. Instead of having a date night, couples are bound to split up: women will see Magic Mike and men will see Ted. Ted director Seth MacFarlane's brand of humor is well-established thanks to the popularity of Family Guy, and it shouldn't be hard for him to transfer that trust to Ted. It also helps that the disappointing performance of That's My Boy leaves the market wide open for an R-rated comedy.

Fandango reports that Ted accounts for 7% of daily sales.

By now, Tyler Perry's fans know exactly what they are getting when they go to see a Madea film. Perry's biggest hit remains Madea Goes To Jail with $90.5 million domestically, and the multi-hyphenate's loyal fans will show up once again for this latest effort.

Madea's Witness Protection accounts for 6% of daily sales on Fandango.

Expect Madea's Witness Protection to grab $24 million from around 2,000 locations.

People Like Us will struggle to find a market in such a crowded market. The female-skewing flick will have to settle for what's left over after Brave and Magic Mike take big bites. Expectations are modest. A $4.5 million opening from around 2,000 locations is likely.