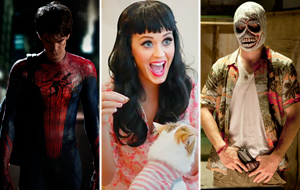 Prior to last year, 2004's Spider-Man 2 held the three-day Independence Day weekend record with $88.2 million (after opening on Wednesday).  That changed when Michael Bay's Transformers: Dark of the Moon launched to $97.9 million in 2011 (also with a late Tuesday/Wednesday debut).  The first Transformers rounds out the top three openers of the holiday weekend with its $70.5 million haul (following a Tuesday release) in 2007.

- As a firmly established property across all ages, especially kids, the Spider-Man brand still has a lot of appeal and is backed by a history of huge numbers.
- The film has the coveted spot of being the marquee attraction for the lucrative Independence Day holiday week/weekend.
- The Tuesday opening could help it steamroll positive word of mouth if the film doesn't disappoint.
- While it won't be able to come anywhere close to Avengers numbers, there could be at least a small boost of goodwill from that film.
- Its online positive-to-negative comment ratio has improved with every trailer -- as has its buzz -- which is a rarity.
- Competitive advantage: 3D prices. Plus, not much competition for older audiences until The Dark Knight Rises hits.

- Spider-Man 3 left a stigma on the series similar to how Batman & Robin did for that franchise before Christopher Nolan stepped in.  Batman had seven years of downtime, while Spidey only has five.  Sequels and reboots always pay for the sins of their predecessors.
- Superhero reboots typically don't set the box office on fire.  See Batman Begins and Superman Returns, both of which struggled to reach $200 million.  And unlike those two films, The Amazing Spider-Man doesn't even have the luxury of being the first *or* second most anticipated superhero film of its summer.
- Pirates of the Caribbean, Shrek, and X-Men all saw their fourth entries decline in total ticket sales by nearly half from their direct predecessors (none of which were very well-received either).
- While its social media buzz has improved with each trailer, it is still miles off from what The Avengers and The Dark Knight Rises were at.
- This is the dark side of what Christopher Nolan's Batman legacy hath already wrought: an industry that thinks a darker and less friendly tone can successfully apply to every superhero. This could seriously impact its core kiddie audience *and* older fans of the original movies.
- The Avengers has probably stolen a lot of this film's thunder, and Nolan's Batman finale will likely steal the rest of it.
- Many are already wondering why the origin is being remade just 10 years after it was done successfully.  Audiences want something fresh or familiar.
- New cast + no star power = no familiarity for non-fans to latch onto.
- Competitive disadvantage: Brave should still have a solid kiddie audience at this point and Ice Age 4 releases just one week later.   If G.I. Joe: Retaliation somehow surprises, that would spell doom for Amazing Spider-Man getting any traction with younger crowds.

Katy Perry: Part of Me 3D

- Katy Perry has been and continues to be the "it" pop star of the moment.
- Huge album sales and popularity, appeal to both men and women, and her large teen girl audience could all serve this very well.
- Justin Bieber's, Miley Cyrus's, and Michael Jackson's concert movies all pulled very similar numbers (averaging $27 million on opening weekend and about $69 million total).
- Its not exactly scientific, but, the summer release fits nicely with Perry's "summery" image.  The date could very well be the right time of year for this.
- Holiday week/weekend could beef up the audience slightly.  No direct competition follows it either.
- Given the target audience, it could post strong summer midweek numbers, though weekend numbers could be deflated a bit in turn as well.

- Releasing in the heart of summer is still a risk, and generally unprecedented, for a 3D concert movie.
- The Jonas Brothers' movie disappointed a few years back, but their level of popularity wasn't anywhere near that of Perry or the other aforementioned concert movie leads.
- Rock of Ages goes after a similar audience just a few weeks earlier.
- Perry's fan base might not be quite as obsessive as those of Cyrus and Bieber who had a TV show and a swoon factor in their favor, respectively.  Repeat viewings may be low.
- Bieber's movie ran Twitter for weeks upon weeks before his film.  That said, the search string for this isn't very convenient thanks to the name of the film.

- Universal wouldn't have moved it to the summer if they weren't incredibly confident about it.  This could be a mid-summer sleeper.
- Oliver Stone.  Its not significant, but his name is at least somewhat appealing to select adult crowds.
- There's not much in the way of adult thrillers at this time of the year.  If Amazing Spider-Man disappoints, a few extra moviegoers might be willing to take a chance on this.
- In addition to Stone's presence, there are also a lot of notable names in the ensemble cast.
- In a summer filled with superhero films and popcorn flicks, this looks to be a gritty real world film that might appeal to both men and women.

- Oliver Stone.  His box office track record leaves much to be desired for such a prolific name.  He's only had one film top $76 million.  That was 26 years ago.
- Mainstream audiences will favor something like G.I. Joe: Retaliation over this.
- Could be too serious for summer.  These types of films are usually better suited with fall releases.
- John Travolta is coming off of two box office bombs: From Paris with Love and Old Dogs.  He also has a heap of negative buzz surrounding him about propositioning different folk.  Its all supposedly fabricated, but negative perception of a moral nature when it comes to a star never helps (see Tom Cruise).

Notable changes on our forecast this week include slight revisions on The Dictator, Battleship, and What to Expect When You're Expecting.

Check out our predictions for these and other upcoming films in the table below.