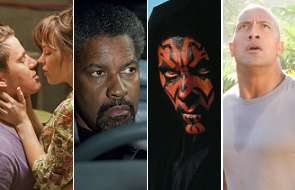 Four new releases are poised to give the domestic box office a much-needed boost this coming weekend.

The Vow has emerged as the clear favorite to claim the #1 spot. Releasing a romantic drama in time for Valentine's Day is one of the safest bets that Hollywood makes all year, and The Vow is going to reap the benefits. The combination of two stars—Channing Tatum and Rachel McAdams—playing lovers at the height of their drawing power will result in a financial juggernaut. And, unlike 2010's Valentine's Day, The Vow won't expire after the holiday passes.

As of 3 p.m. PT, Fandango.com reports that The Vow represents an incredibly healthy 30% of daily sales.

Look for The Vow to take in $38 million from around 2,800 locations during its debut frame.

Audiences love to watch Denzel Washington play the bad guy. 2001's Training Day, the film that finally won Washington a Best Actor Oscar, managed $105 million worldwide. Six years later, Washington tapped into his dark side in American Gangster, a $266.5 million worldwide hit. Washington once again plays the heavy in Safe House, a CIA thriller that promises action backed up by a brain. Add to Washington's well-established drawing power the fact that co-star Ryan Reynolds has amassed plenty of loyal fans of his own, and Safe House looks like a sure thing.

Safe House should make $30 million from around 3,000 locations during its debut frame.

George Lucas will tap into Star Wars mania once again by releasing Episode I from his beloved saga in 3D. While The Phantom Menace isn't exactly the most revered installment—in fact, you could argue that it is the most loathed—Star Wars buffs will still have a tough time avoiding the multiplex. Lucas may be widely mocked for a lot of his choices, but his fans still fork over money time and time again.

Star Wars: Episode I - The Phantom Menace is set to take in $19 million from 2,600 locations during its debut frame.

Dwayne Johnson takes over for Brendan Fraser in Journey 2: The Mysterious Island, the sequel to 2008's Journey to the Center of the Earth. While there will be some brand loyalty, Johnson is the sequel's best asset. The wrestler-turned-actor proved that he can rope in families thanks to the success of The Game Plan ($148 million worldwide) and The Tooth Fairy ($113 million worldwide).

Fandango reports that Journey 2 has yet to crack the top five sellers list—not a good sign.

Look for Journey 2: The Mysterious Island to grab $18 million from more than 3,400 locations during its debut frame.

Check out the rest of our predictions in the table below.