New Boxoffice Weekly On The iPad: Nu Metal, Perfect Boyfriends And How To Dress Like Ryan Gosling

Get your motor running with our Drive issue of Boxoffice Weekly. Director Nicolas Winding Refn speeds us through his unusual creative process and says that Drive's influences were odder—and older—than the hot pink title credits and rad '80s action would have you guess. Hear three of Drive soundtrack artist Johnny Jewel's iconic songs as he opens up about how he got asked to do the film's entire musical score (and why it will never play over the movie, unless you pull some Pink Floyd/Wizard of Oz shenanigans), plus see a flipbook of his sketches for the movie—it's like watching Drive in pencil drawings. Learn how to poach star Ryan Gosling's cool when Drive costume designer Erin Benach goes point-by-point over his entire wardrobe from his satin scorpion jacket to his retro slick boots and vent with our columnist Ross A. Lincoln as he critiques what Drive—and other Los Angeles movies—gets wrong about LA traffic.

As Lion King 3D hits theaters, weigh in on editors Amy Nicholson and Phil Contrino's fight over which Disney movie next deserves the 3D treatment, wager on who would win if Jason Bourne fought James Bond, listen in as composer Mark Isham explains how he warped the nu metal sound of MMA fighting for his Warrior score, wince at the meanest quips critics wrote about Bucky Larson, pump up to read how the reboot of Straw Dogs argues that the American man has changed for the worse, get the full backstory of the rise of Danny and Richard Elfman and their wild 1982 flick Forbidden Zone (and the new sequel?), snort at the funniest Twitter jokes about Eddie Murphy hosting the Oscars, take tips on how to be the perfect rom com boyfriend without being a James Marsden wuss, get schooled by the uncredentialed Dr. Alonso Duralde in Final Grade, find out the real facts about the porn industry when we send an adult performer to analyze Bucky Larson, and pop popcorn for a full retro night at the movies: a newsreel, a cartoon, a serial and a full feature—Abbott and Costello in Africa Screams—all on your iPad. Plus reviews of every flick in theaters this week (from 3,000 screens to just three) and an interactive tour of the science behind Boxoffice's patented movie opinion tracking, The Pulse. Click here to check it out on iTunes. 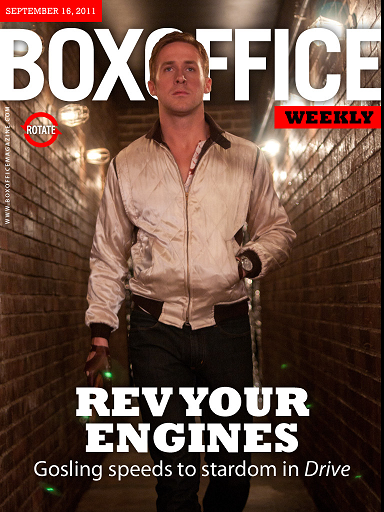 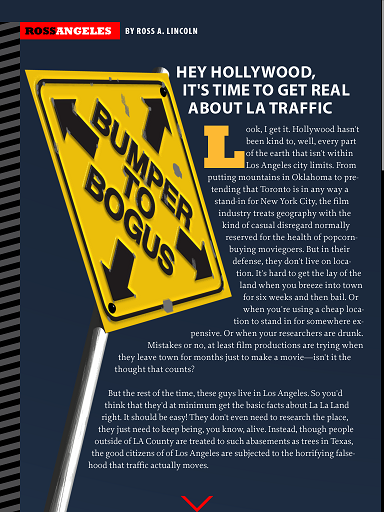 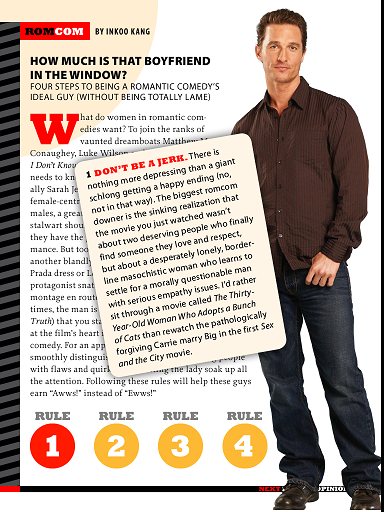 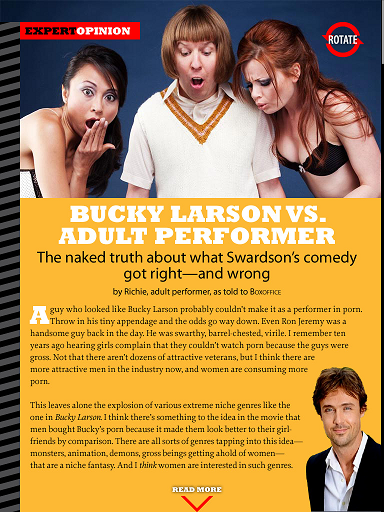 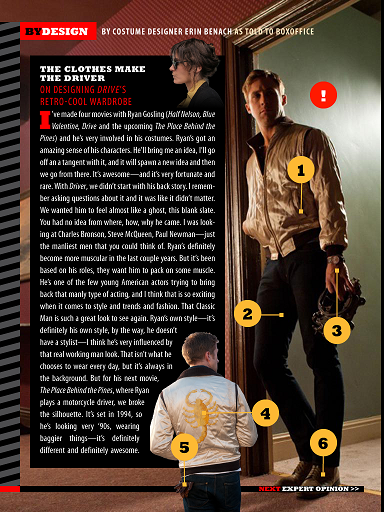