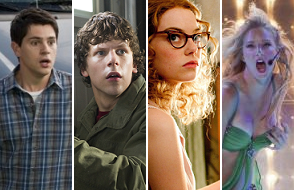 Four new films are invading theaters this weekend, but none of them look strong enough to take the #1 spot away from Rise of the Planet of the Apes.

Apes shocked the industry last weekend by raking in an impressive $54.8 million. Now the reboot looks to poised to avoid a catastrophic sophomore drop thanks to incredibly healthy word-of-mouth. More than 42,000 Flixster users have combined to give Apes a 90% approval rating.

As of 4 p.m. PT, Fandango.com is reporting that Apes is responsible for 10% of daily sales. That's not bad considering that it has to compete with The Help at 53%.

Look for Rise of the Planet of the Apes to muster $26 million during its second weekend.

Final Destination 5 has the best shot at dethroning Apes. Horror fans have been undeserved this summer, so fright seekers will take anything at this point. 2009's The Final Destination opened to $27.4 million, which means that even if FD5 loses a little of that audience it can still be a hit.

Fandango is reporting that FD5 has yet to crack the top five sellers list. Activity should pick up on Thursday.

Expect Final Destination 5 to make $20 million from more than 3,100 locations.

30 Minutes or Less marks the reunion of Zombieland star Jesse Eisenberg and director Ruben Fleischer. There's little chance that 30 Minutes will match Zombieland's surprising $24.7 million debut, but it does appear to have "sleeper" written all over it. August is the perfect time to launch an R-rated comedy—see Superbad, Pineapple Express and Tropic Thunder—so 30 Minutes could fill that void now that The Change-Up has bombed.

Activity on Facebook and Twitter is very strong even for a film aimed at males 18-25. Of course, 30 Minutes could turn into another Scott Pilgrim vs. the World. The Universal release had a ton of online buzz before opening to a depressing $10.6 million.

30 Minutes or Less looks poised for a $17 million debut from around 2,600 locations.

The Help will skew heavily female, and it will seem like a breath of fresh air for women who were dragged kicking and screaming to the likes of Captain America and Rise of the Planet of the Apes. There's always room in the summer for a film aimed at serious-minded adults who don't care for explosions and car chases when they go to the movies. That audience came out to support Crazy, Stupid, Love and they'll be back again for The Help. The presence of Emma Stone will also go a long way when it comes to roping in women 18-25.

The Help should muster $8.5 million on Wednesday and Thursday on top of $18 million over the weekend from 2,511 locations.

Glee: The 3D Concert Movie looks like it will fall directly into the "Why should I pay for something I get for free on TV?" trap. Online buzz is far from enthusiastic—a troubling sign for a film aimed so heavily at Facebook/Twitter-friendly youths. The Help will also scoop up a lot of crucial female demos that normally might have showed up for a helping of Glee on the big screen.

Fandango is reporting that Glee accounts for 5% of daily sales. In other words, this is no Justin Bieber concert film.

Look Glee: The Concert Movie to eke out a $8 million debut haul from around 1,800 locations.

Tags: Final Destination 5, 30 Minutes or Less, The Help, Glee: The 3D Concert Movie, Rise of the Planet of the Apes