Weekend Predictions: 'Conan the Barbarian,' 'Spy Kids: All the Time in the World,' 'Fright Night' and 'One Day' 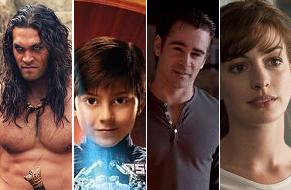 None of the four newcomers hitting theaters this weekend will be able to topple The Help.

Disney's drama is already a massive word-of-mouth success. With an A+ overall CinemaScore rating and a 93% approval rating from more than 16,000 Flixster users there's nothing that will stop The Help from hitting $100 million domestically. The socially conscious flick proves once again that there's always plenty of room at the box office during the summer for serious-minded material aimed at adults.

As of 4 p.m. PT, Fandango.com is reporting that The Help leads daily sales with an impressive 31%.

Look for The Help to rake in another $21 million during its sophomore frame.

Lionsgate's Conan the Barbarian looks like the strongest newcomer. Forget that star Jason Momoa is far from a reliable at this point in career—the real selling point is the Conan character. Fans of '80s action flicks—the same crowd that made Lionsgate's The Expendables a massive hit last August—will show up in droves on opening weekend. Look for this version of Conan to be very front-loaded.

Fandango is reporting that Conan the Barbarian has yet to crack the top five sellers list. Chances are online sales will pick up on Thursday as more Conan fans plan for the weekend.

Conan the Barbarian should manage $16 million from 3,105 locations during its debut frame.

Robert Rodriguez ventures back to family-friendly territory with Spy Kids: All the Time in the World. The key to any successful 3D film aimed at kids is selling their parents on the film first, and All the Time in the World doesn't seem too concerned with that. The presence of Ricky Gervais' voice work might make the flick seem a bit more adult-friendly, but we're betting that a lot of parents will be dragged into this one kicking and screaming.

All the Time in the World has also failed to crack the top five sellers list on Fandango—a disconcerting sign.

Expect All the Time in the World to grab $15.5 million from around 3,000 locations during its debut frame.

Fright Night will try to tap into the current hysteria surrounding vampires. The big question is whether or not the Twilight saga has poisoned that well and made vampires look lame to males 18-34—the group that Fright Night is gunning for. The star power of Colin Farrell won't help much. Farrell is making a play at bigger roles after falling off the mainstream radar for a bit, but audiences may not welcome him back with open arms.

Fright Night looks poised for $14 million from around 2,900 locations.

One Day will be hurt considerably by the popularity of The Help. It also doesn't help that critics are ripping the romantic drama to shreds. Adults may be starved for serious flicks after a summer of bombs and car chases, but they can still smell a stinker a mile away. See also Larry Crowne.

Fandango reports that One Day has yet to make a serious impact.

A debut haul of $6 million from around 1,600 locations looks likely for One Day.

Tags: Conan the Barbarian, Spy Kids: All the Time in the World, Fright Night, One Day, The Help