Weekend Predictions: 'The Help,' 'Don't Be Afraid of the Dark,' 'Colombiana' and 'Our Idiot Brother' 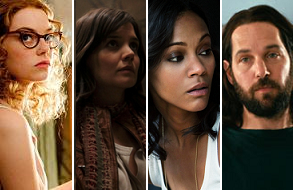 Thursday Update: Since Our Idiot Brother will be playing at 2,555 locations instead of 2,000 as estimated, we've bumped our prediction to $10 million.

Wednesday Update: Three newcomers won't be strong enough to topple The Help during a frame that will be plagued by Hurricane Irene.

The Help has, well, helped livened up what's turned out to be a pretty mediocre August. After a summer full of films aimed at teens and twentysomethings, it should come as no surprise that the 35+ crowd is coming out in droves to support it.

As of 4 p.m. PT, Fandango is reporting that The Help leads daily sales with a solid 28%. Disney's drama should maintain that lead all week.

Look for The Help to rake in $15 million, which should be more than enough for its second #1 weekend.

Don't Be Afraid of the Dark looks to be the strongest of three newcomers, but not by much. Horror junkies weren't served in a major way by Final Destination 5, so the market is open for a fright flick that takes itself seriously. The real question now is whether or not Dark's intentionally vague marketing blitz will make moviegoers curious or just leave them apathetic. We're guessing it's going to be a lot closer to the latter.

Fandango reports that Don't Be Afraid of the Dark has yet to make a dent in online sales, but that should change tomorrow as more moviegoers plan for the weekend.

Don't Be Afraid of the Dark should rake in $12 million from 2,760 locations during its debut frame.

Colombiana could be a major movie for star Zoe Saldana. The young actress received very little recognition for her role as the love interest in Avatar—the fact she was playing a CGI character means that she received only fraction of the attention that should come from starring in the highest-grossing film of all time. Action films with female leads are hit and miss, so Saldana is venturing into tricky territory.

Colombiana has yet to make a dent in online sales on Fandango.

Expect Colombiana to grab $11 million from about 2,614 locations during its debut frame.

Our Idiot Brother may be a little too quirky for the same mainstream crowd that showed up to see Paul Rudd carry Role Models and I Love You, Man. Yet a surprise hit is still a possibility since the market is wide open for a comedy after the disappointing performance of 30 Minutes or Less.

Our Idiot Brother joins the other newcomers in not selling many advance tickets on Fandango. That could change on Thursday if the comedy becomes a viable date night option.

Tags: The Help, Don't Be Afraid of the Dark, Colombiana, Our Idiot Brother