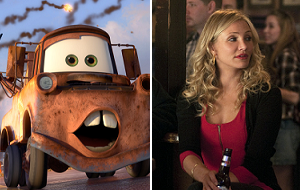 Cars 2 will continue the Disney/Pixar winning streak this weekend with what's bound to be a healthy #1 debut. Meanwhile, Bad Teacher will rope in plenty of adult moviegoers.

Expectations are set very high for Cars 2. Even though the first film came out in 2006, Disney's billion-dollar merchandising blitz has kept the property alive in a big way. It also helps that the new film features an international storyline—an important asset when it comes to the worldwide haul. Cars 2's two main weaknesses are: 1) it isn't as beloved by critics as other Disney/Pixar efforts and 2) even though it should qualify as four-quadrant hit, it's bound to skew male. Those two weaknesses are minor in the big scheme of things, and they won't do much to dampen what's going to be a strong debut frame.

As of 4 p.m. PT, Fandango.com is reporting that Cars 2 is responsible for a solid 28% of daily sales. That's impressive considering that tickets for Harry Potter and the Deathly Hallows: Part 2 account for 17%.

Look for Cars 2 to rake in $67 million from around 3,900 locations during its debut frame.

Coming on the heels of Bridesmaids' massive success, Bad Teacher is poised enforce the idea that women can do raunchy comedies just as well as men. The star power of Cameron Diaz, Jason Segel and Justin Timberlake combined with an easily digestible high-concept premise are all that's needed to pack auditoriums with adults this weekend. Diaz is in need of a hit after the mediocre performance of Knight and Day and The Box, and she'll get one.

It's very promising that Bad Teacher is outpacing Bridesmaids in a major way on Facebook and Twitter. The Sony release's star power has played a major role in that.

Fandango is reporting that Bad Teacher has yet to crack the top five sellers list on Fandango. The raunchy comedy should still pop up on the list tomorrow. If it doesn't, that will be cause for concern.

Expect Bad Teacher to gross $25 million from around 3,000 locations this weekend.