Weekend Predictions: 'Tangled,' 'Burlesque,' 'Love and Other Drugs' and 'Faster' 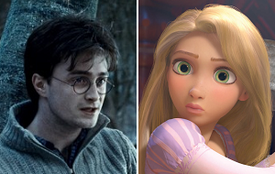 The world's favorite young wizard will have no problem fending off four major newcomers during the Thanksgiving holiday frame.

The end of the Potter franchise is going to be bittersweet for Warner Brothers. While the cash cow is going away, the last two films are destined to become the most successful. Last weekend, Deathly Hallows: Part I's $125 million haul shattered the opening weekend record of $102 million set by Goblet of Fire in 2005. After four days of release it already has more than $133 million in the bank domestically.

Even though the strong rush last weekend means that Potter's sophomore frame will suffer a bit, there's still no chance that it will lose its place on top of the box office.

As of 4:30 p.m. PT, Fandango.com is reporting that Potter is responsible for 71% of daily sales.

Look for Harry Potter and the Deathly Hallows: Part I to rake in $55 million from Friday-Sunday and $83 million from Wednesday-Sunday.

Disney's Tangled is by far the strongest of the newcomers. It's hard to beat the trust Disney has earned among families looking for wholesome entertainment during the holiday season.

Tangled has built up quite a following on Facebook with over 570,000 supporters on its most active page. On Twitter, it is inspiring more tweets than the likes of Old Dogs and The Princess and the Frog.

Fandango is reporting that Tangled is responsible for 17% of daily sales.

Even though some were quick to label it as the new Showgirls, Burlesque is shaping up to be anything but a dud. Stars Christina Aguilera and Cher reach women both young and old, which should make for a potent combination at the box office.

According to Boxoffice.com's WebWatch, Burlesque currently ranks ahead of all unreleased films with a 13.37% share of online opinions.

Support for Burlesque on Facebook is very healthy. The film's most active page boasts more than 165,000 fans, which is far more than Morning Glory's 46,000+ on the day before release. On Twitter, Burlesque is generating way more tweets than the likes of Step Up 3D, Eat Pray Love and The Last Song.

Fandango is reporting that Burlesque is responsible for 4% of daily sales.

Anne Hathaway's daring performance in Love and Other Drugs is turning out to be the film's biggest selling point, because she's the only part of the 20th Century Fox release that still has palpable Oscar buzz. While director Edward Zwick's latest was once seen as a potential Best Picture nominee, other heavyweights have stepped up to overshadow.

Whether or not moviegoers buy Hathaway and Jake Gyllenhaal as a couple will largely determine how well the film does. Since women will have a tough time dragging their significant others to Burlesque, Love and Other Drugs will be the weekend's best date night option.

Love and Other Drugs has yet to hit 10,000 supporters on its most active Facebook page, which isn't a good sign for a film that should have a strong appeal among twentysomethings. Twitter activity doesn't provide much reassurance, considering that the dramedy is trailing Letters to Juliet.

Faster will be able to find a niche among action enthusiasts who are looking to avoid typical holiday fare. CBS Films has given the Dwayne Johnson vehicle an enthusiastic marketing blitz, and it has shot at becoming the distributor's strongest performer yet - a record that currently belongs to The Back-up Plan with $37 million.

With more than 36,000 supporters, Faster's Facebook page easily outpaces The Next Three Days tally of around 25,000 on the day before it hit theaters. On Twitter, Faster ranks behind The Other Guys and Unstoppable.

Faster should bring in $10.5 million over the weekend and $16 million from Wednesday-Sunday at 2,451 locations.

Check out the rest of our top 10 predictions for Friday-Sunday in the table below.