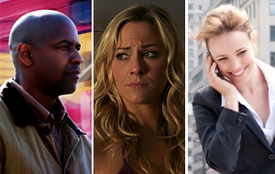 Check out our final predictions in the table below.

Wednesday Afternoon Update: Even though Unstoppable, Skyline and Morning Glory all have their strengths, Megamind looks poised to spend a second weekend on top of the box office.

Word-of-mouth for Megamind may not be glowing, but it is more than strong enough to keep the 3D flick in first place. The latest effort from DreamWorks Animation scored an A- overall rating from CinemaScore and it boasts a healthy 79% approval rating on Flixster from more than 30,000 user ratings. According to Boxoffice.com's WebWatch, Megamind holds a 13.59% share of online opinions among release films, putting it well ahead of Due Date and Paranormal Activity 2.

As of 3 p.m. PT, Fandango.com is reporting that Megamind is responsible for 9% of daily sales. That's not bad considering that Harry Potter and the Deathly Hallows: Part I looms large with 64% and hundreds of sold-out shows.

Look for Megamind to rake in $30 million during it sophomore frame.

It's shaping up to be a close race between Unstoppable and Skyline, and the two films could end up being separated by a slim margin this weekend.

Skyline is certainly generating more online buzz than Unstoppable at this point in the game. The alien invasion flick has been easily beating Unstoppable and Morning Glory all week in terms of Facebook growth, and its most active page has more than 100,000 supporters. On Twitter, Skyline is trailing the likes of Legion and Daybreakers. Of course, Skyline does appeal largely to 18-34 males, and that group can easily distort online data because of high levels of activity. Just look at what happened with Scott Pilgrim vs. the World. A success online and a failure at the box office.

Unstoppable isn't showing much of a pulse on Facebook, but that's not necessarily cause for concern. The Town, another adult-skewing thriller, also lacked palpable support on Facebook and it still opened to $23.8 million. Twitter activity isn't any more reassuring. Unstoppable is inspiring less tweets than The Book of Eli, The Town and Law Abiding Citizen. Even with a lack of support online, Unstoppable still has Denzel Washington's reliable drawing power going for it and Skyline lacks real star power.

Unstoppable was able to crack in to Fandango's top five daily sales list with 1%, which means that its lead over Skyline can't be by much.

We're giving the edge to Unstoppable. Look for the 20th Century Fox release to rake in $20 million from more than 3,100 locations. Meanwhile, Skyline shouldn't be far behind with $19 million from 2,600 locations.

Morning Glory will need strong word-of-mouth to propel it past this weekend, because its bound to be overshadowed. While Rachel McAdams certainly has a great list of credits, she's far from a reliable draw at the box office. Harrison Ford and Diane Keaton can only provide so much help.

It doesn't bode well that Morning Glory didn't crack into Fandango's top five sellers list on the day it opened.

Check out our full top 10 predictions in the table below.