Weekend Predictions: 'Megamind,' 'Due Date' and 'For Colored Girls'

A supervillain, a guy rushing across the country to see his pregnant wife give birth and a group of distraught women will square off for the #1 position this weekend 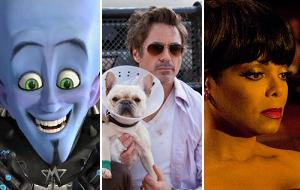 The first weekend of November is bound to be a prosperous one at the box office with three strong new releases hitting theaters. DreamWorks Animation's Megamind currently stands as the clear favorite to win the frame.

After the domination of Jackass 3D, Paranormal Activity 2 and Saw 3D over the last three weekends, family audiences are in need of a reason to go to the movies. Megamind should provide just that. The fact that the 3D flick features voice work by Will Ferrell, Tina Fey and Brad Pitt means that parents won't complain as much about having to sit through a movie aimed at younger moviegoers.

Brand recognition is very crucial to films at aimed at families. Even though Disney/Pixar still dominates the animation space, DreamWorks Animation is in a close second. The animation house has built up a very strong reputation and plenty of trust.

Megamind's Facebook activity has been healthy all week. The sci-fi flick compares well to Despicable Me in terms of overall support. Despicable Me had more than 135,000 fans on the Wednesday before it hit theaters, and Megamind already has more than 147,000.

On Twitter, Megamind is outpacing How to Train Your Dragon, but not Despicable Me and Shrek Forever After.

As of 4 p.m. PT, Fandango.com is reporting that Megamind is responsible for 4% of daily sales. That number is likely to increase tomorrow as more families plan for the weekend.

Megamind should rake in $49 million from more than 3,500 locations during its debut frame.

Due Date director Todd Phillips carries a lot of clout after The Hangover. Add to that the presence of Robert Downey Jr. and Zach Galifianakis and there's no way that Due Date won't become a huge hit. Warner Bros. has also given the comedy an excellent marketing blitz led by a great trailer that doesn't give away all the jokes.

According to WebWatch, Due Date holds a 4.60% share of online opinions among unreleased films. While not a particularly strong number, it's not disastrous by any means.

Due Date has added more new supporters on Facebook this week than Megamind and For Colored Girls. That's a very good sign that more moviegoers are interested in seeing the film this coming weekend.

Twitter activity for Due Date is also healthy. The WB release is outpacing Couples Retreat and Grown Ups, but not The Other Guys.

As of 4 p.m. PT, Fandango.com is reporting that Due Date is responsible for 3% of daily sales. Since the film is bound to be a date night choice, that number may also go up on Thursday.

Look for Due Date to bring in $38 million from more than 3,200 locations during its debut frame.

For Colored Girls director Tyler Perry brings with him a very loyal fan base, and he's easily one of the most consistent earners working in Hollywood today. Even though For Colored Girls is a bit darker than most of his film, Perry's fans are sure to stick by him. Plus, it doesn't hurt that the film is receiving tons of promotion on Oprah and The View.

The Lionsgate release boasts a strong 9.81% share of online opinions among unreleased films. That puts it ahead of Skyline, 127 Hours and Burlesque, which are all picking up a lot of momentum right now.

Facebook activity hasn't been anything special thisis week, but that's mostly due to the fact that Tyler Perry's most active page already has a ton of supporters.

On Twitter, For Colored Girls is outpacing Why Did I Get Married Too?, but it trails Eat Pray Love. The controversial film is bound to inspire plenty of tweets after it opens.

As of 4 p.m. PT, Fandango.com is reporting that For Colored Girls is responsible for a very reassuring 18% of daily sales.

For Colored Girls should manage $27 million from 2,127 locations.