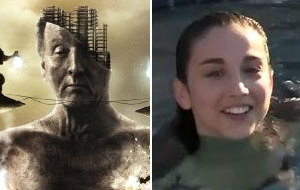 Wednesday Afternoon Update: Newcomer Saw 3D and last weekend's champ Paranormal Activity 2 are set to square off for the attention of moviegoers looking to be scared. It's bound to be an incredibly close race, but Saw 3D looks poised to win.

The Saw franchise stumbled a bit last October when the first Paranormal Activity opened wide with $21 million and stole the #1 spot away. Saw VI snagged only $14.1 million after Saw V debuted to $30 million the previous year. The franchise will now hope to regain some popularity with the help of 3D technology, but even that's not guaranteed to help. While My Bloody Valentine 3D showed that an extra dimension can really work for the genre, My Soul to Take recently landed with a thud.

Lionsgate clearly recognizes that their cash cow is running out of steam, which is why Saw 3D is being billed as the last installment. There's more money to be had, but it's easy to see that the Paranormal Activity franchise is the new Halloween juggernaut.

According to the most recent WebWatch report, Saw 3D holds a dominant 28.87% share of online opinions among unreleased films. That's pretty impressive considering that a wave of Justin Bieber hysteria swept the Internet after the release of the trailer for Justin Bieber: Never Say Never.

The most active Saw page on Facebook has built up a very healthy base of supporters. Even with more than 3 million fans, the page has been consistently adding more than 15,000 new enthusiasts each day this week.

On Twitter, Saw 3D is lagging behind Paranormal Activity 2's tweet volume in the days leading up to its release. Still, the Lionsgate release is inspiring a healthy amount of activity in its own right.

As of 3 p.m. PT, Fandango.com is reporting that Saw 3D is responsible for 15% of daily sales. It's in second behind Harry Potter and the Deathly Hallows: Part I with 63%.

PA2's word-of-mouth seems to be solid, but not overwhelmingly positive, as it heads into its sophomore frame. The Paramount release tallied an overall grade of B from CinemaScore and it currently boasts a respectable 69% approval rating on Flixster.

Facebook support for PA2 has been overwhelmingly strong. After adding more than 100,000 new fans last weekend, PA2 has been consistently adding more fans on a daily basis than Saw's most active page.

PA2's Twitter activity is also reassuring. It ranks ahead of Saw 3D, TRON Legacy and Justin Bieber: Never Say Never. Yet even though it boasts a high volume of tweets, it does have more than its share of negative ones.

Fandango is reporting that PA2 is responsible for 8% of daily sales as of 4 p.m. PT.

Look for Paranormal Activity 2 to grab another $19.5 million this weekend.