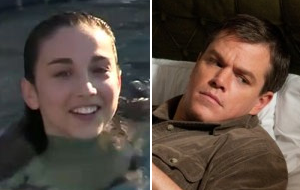 Paranormal Activity 2 looks poised to take the top spot from Jackass 3D this coming weekend.  This marks a win-win situation for Paramount, the distributor of both films.

Paramount has wisely kept a lot of PA2's plot details hidden in the marketing campaign. The element of surprise is what made the first film such a huge hit, and preserving that has helped kick up enthusiasm for the new installment. It also doesn't hurt that PA2 has the same look and feel as the original. That type of continuity is very important to horror enthusiasts. It's quite clear now that PA2 will avoid the sophomore slump that crippled the Blair Witch sequel.

According to BoxOffice.com's most recent WebWatch report, PA2 holds a dominant 34.15% market share of online opinions among unreleased films. That's particularly impressive considering that such blockbuster releases as Harry Potter and the Deathly Hallows: Part I and TRON Legacy are beginning to generate a lot of buzz.

PA2's Facebook activity has been very healthy all week. The horror flick's most active page added more than 80,000 fans on Monday and based on its current pace the page could easily reach 2 million fans soon after hitting theaters on Friday.

On Twitter, PA2 is also posting dominant numbers. Saw 3D, Harry Potter and the Deathly Hallows: Part I and Justin Bieber: Never Say Never are inspiring plenty of Tweets, but not nearly as many as PA2.

As of 4 p.m. PT, Fandango.com is reporting that PA2 is responsible for a healthy 23% of daily sales. Harry Potter and the Deathly Hallows: Part I leads with 36%.

Expect Paranormal Activity 2 to rake in a solid $28 million from around 2,900 locations during its debut frame.

Jackass 3D's $50.4 million opening defied expectations and has already made it a massive success, and the next milestone is bound to be a $100 million domestic haul. The raunchy flick  tacked on more than $8 million on Monday and Tuesday combined, which indicates that word-of-mouth is very positive.

According to WebWatch, Jackass 3D represents an 18.31% market share of online opinions among released films. That's a good sign that fans of the film can't stop talking about their favorite stunts and/or gags.

Fandango is reporting that Jackass 3D is responsible for 7% of daily sales as of 4 p.m. PT. If that number holds steady on Thursday, it'll bode well for the Paramount release's chances of fending off PA2.

Look for Jackass 3D to bring in $23 million during its sophomore frame.

Despite looking like an Oscar contender on paper, Hereafter has been hit with a rush of unenthusiastic reviews and a general lack of enthusiasm on the part of mainstream moviegoers. The Warner Bros. release was able to bring $220,322 from six locations this past weekend, which isn't exactly an overwhelmingly positive debut.

Hereafter's Facebook activity has been very disconcerting. Eastwood's latest has attracted only slightly more than 5,000 fans, which is bad even for an adult-skewing film. The Town had nearly 10,000 fans on the Wednesday before hitting theaters.

Twitter activity for Hereafter is weak as well. The drama is generating less tweets than the likes of Green Zone, The Informant! and Invictus.

As of 4 p.m. PT, Hereafter has yet to crack the top five sellers list on Fandango.

Look for Hereafter to rake in $10.5 million from around 2,200 locations during its debut frame.