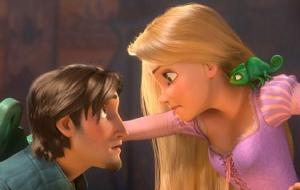 This week, we've added four new films to the Long Range Forecast. Tangled, Faster, Love and Other Drugs and Burlesque are all set to open on November 24.

After finding success with Toy Story 3 earlier this year, Disney is back with Tangled, another animated 3D flick. The fact that Tangled is based on the familiar story of Rapunzel will make families very comfortable when it comes to getting in line.

The simple truth is that Disney can't be beat when it comes to entertainment during the holidays, and Tangled is sure to rake in some serious cash.

With Faster, Dwayne Johnson returns to the action genre after taking a trip to the world of family films in the likes of The Game Plan and The Tooth Fairy. Faster is bound to please fans of Johnson's Walking Tall, which grossed $46 million domestically before expanding its audience on DVD. Look for the CBS Films release to post modest numbers.

Love and Other Drugs could break out in a big way if it attracts a lot of Oscar talk. Anne Hathaway is already generating buzz for her performance as a young woman with parkinsons. Love and Other Drugs has a similar tone to Up in the Air, so as long as audiences are in the mood for another dark comedy it should do pretty well.

Burlesque has dud written all over it. Stars Christina Aquilera and Cher are far from box office draws and story looks incredibly banal. Expect a lot of unfavorable comparisons to Showgirls.