Long Range Forecast: 'Harry Potter and the Deathly Hallows: Part I' and 'The Next Three Days'

A boy wizard and a man seeking justice will try to do some damage at the box office this November. 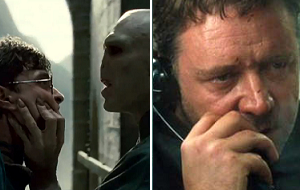 This week, we've added two new films to the Long Range Forecast. Harry Potter and the Deathly Hollows: Part I and The Next Three Days are both slated to hit theaters on November 19.

November marks the beginning of the end for the lucrative Harry Potter franchise. Warner Bros. will certainly be sad to see it go, but the last two films in the series could end up being the most successful ones yet. The addition of 3D to the franchise will help tack on a decent amount of change to what's bound to be an already very impressive haul.

Russell Crowe plays a man who desperately tries to break his wife out of jail in The Next Three Days from director Paul Haggis. Crowe has had a tough time finding a hit lately when he's not working with Ridley Scott, so that doesn't bode well for his latest venture. Then again, The Next Three Days has a lot in common with Taken and Law Abiding Citizen, two actions flicks that focused on one man fighting the system.

Check out our predictions for both films as well as others in the table below.

Tags: Harry Potter and the Deathly Hallows: Part 1, The Next Three Days