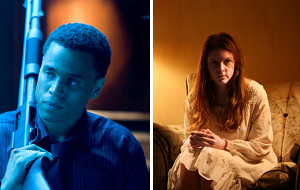 Wednesday Update: The summer box office season is now approaching its end, but Lionsgate and Sony are hoping that there are still enough box office dollars to go around for their latest respective releases. Though both Lionsgate's The Last Exorcism and Sony's Takers are likely to appeal heavily to moviegoers under 25, there should be plenty of room for both to co-exist in the marketplace this weekend.

With this summer's horror options having been quite limited thus far, the timing appears to be perfect for The Last Exorcism. Given its teen-friendly PG-13 rating, Lionsgate is hoping to duplicate the success it experienced back in the spring of 2009 with the PG-13 rated The Haunting in Connecticut. While The Last Exorcism is unlikely to reach quite the same opening weekend heights of Haunting in Connecticut ($23.0 million), it looks set for a very nice debut of its own this weekend.

Given that The Last Exorcism is being aimed at younger horror fans, it should come as no surprise that the film is making very evident noise online. According to BoxOffice.com's most recent WebWatch data, The Last Exorcism is currently responsible for a 19.08 percent market share of Internet opinions among upcoming releases.

The Last Exorcism is showing promising signs on Twitter this week, though it is coming in a bit behind Takers so far in terms of total tweets. Over on Facebook the film has totaled nearly 100,000 fans. The film's online presence has been helped greatly over the past week thanks to its very successful Chatroulette viral promotion.

After a series of release date delays, Takers is finally set to debut in theatres this weekend. The Screen Gems release is also rated PG-13, which is no doubt helping boost its strong online presence. Also helping build pre-release enthusiasm for the film is the presence of T.I. and Chris Brown among the film's ensemble cast, which also includes Hayden Christensen, Matt Dillon, Idris Elba and Paul Walker.

Both T.I. and Chris Brown have large built-in fanbases, who should turn out on opening weekend as they did in 2006 with ATL (which featured T.I.) and in 2007 with This Christmas (which featured Brown, as well Elba and was also released by Screen Gems). ATL and This Christmas generated respective opening weekends of $11.55 million and $17.96 million.

Like The Last Exorcism, Takers is displaying a clear online presence this weekend. According to WebWatch, the film is currently responsible for a healthy 15.30 percent market share of Internet opinions among upcoming releases.

As mentioned earlier, Takers is actually outpacing The Last Exorcism on Twitter this week. However, with the built-in fanbases of T.I., Brown and and Elba and a significantly smaller location count, Takers is likely to have the more inflated Twitter activity of the two films in comparison to opening weekend grosses.

Takers also continues to have a major presence on Facebook, where it has now totaled over 370,000 fans. That is an impressive number and is a good sign for the film this weekend. That is stronger than the 265,000 fans Lionsgate's The Expendables had as of the Wednesday before it opened, but Takers is obviously being aided in a big way on Facebook from appealing to a much younger target audience than The Expendables did.

Takers is estimated to launch in 2,000 locations this weekend, which will put it at a disadvantage in its opening weekend battle with The Last Exorcism. Look for Takers to debut in second place with $14.0 million.

Also debuting in theatres this weekend is Avatar: Special Edition. Fox is launching its re-issue of the box office phenomenon in an estimated 700+ locations. The film's location count could limit its potential this weekend, as could the fact that the film has been available on home viewing platforms for months now. At the same time, with its die-hard fanbase and higher priced tickets, Avatar should be able to generate very solid per-location numbers this weekend. Look for Avatar: Special Edition to debut towards the bottom of the top ten with $5.0 million.

Further down on the chart, look for this weekend's fifth place and twelfth place films to be separated by as little as $2 million.