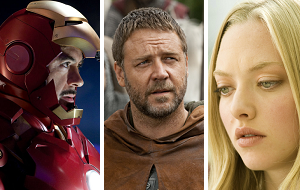 Wednesday Afternoon Update: This weekend, Robin Hood and Letters to Juliet will try to keep the summer movie season moving at a brisk pace after Iron Man 2's impressive debut last weekend. And while both new releases have a lot going for them, they don't stand a chance of unseating Tony Stark from the throne.

Iron Man 2's sophomore hold should be very healthy, at least by summer blockbuster standards. After such a strong opening, it's unlikely that the film will be able manage anything less than a 50 percent decline. Of course, that will still leave the Paramount release with a weekend haul that most studios would kill for.

While some have complained that Iron Man 2 isn't on par with the first film, positive reactions far outweigh the negative ones. The sequel currently boasts an impressive 79 percent approval rating on Flixster.

IM2 also continues to dominate online sales. As of 2 p.m. PT, Fandango.com is reporting that the blockbuster represents a staggering 52 percent of daily sales, while MovieTickets.com is reporting 41 percent.

Look for Iron Man 2 to deliver a sophomore haul of $55 million.

The best thing Robin Hood has going for it is the fact that it's based on a story that audiences are familiar with. While there are always a handful of sleepers to be found during this part of the year, the summer is a time when established brands really flourish.

Robin Hood offers a more meditative, evenly-paced alternative to the flashiness of IM2. That's both good and bad. While Robin Hood will do well among adult moviegoers, its likely to have a tough time appealing to teenagers.

It's also worth calling into question whether or not Russell Crowe can still open a movie. He's stumbled a lot lately with such commercial duds as Body of Lies, State of Play and Tenderness. At this point in his career he may need a trusted property such as Robin Hood in order to have a genuine hit.

As of 2 p.m. PT, MovieTickets is reporting that Robin Hood is responsible for a solid 24 percent of daily sales, while Fandango is reporting 12 percent.

Robin Hood looks poised for a $36 million haul from 3,400 locations during its debut frame.

Letters to Juliet star Amanda Seyfried is fresh off the surprising success of Dear John and her star power is set for another boost thanks to Summit's romantic drama. Juliet will represent a welcome alternative to the macho posturing that exists in Iron Man 2 and Robin Hood.

Even though it has to compete with a handful of high-profile blockbusters, Letters to Juliet still has a presence in the world of online ticketing. As of 2 p.m. PT, both Fandango and MovieTickets are reporting three percent of daily sales for Juliet.

Expect Letters to Juliet to rake in $17 million from 2,800 locations during its opening frame.

Fox Searchlight is sending out Just Wright this weekend as well. While the Queen Latifah vehicle will certainly be overshadowed by other films, it should still be able to find a niche. Look for Just Wright to snag $10 million from 1,800 locations.

Check out our full top 10 predictions in the table below, and make sure to look for our final predictions as well as official location counts tomorrow.