UPDATED: Weekend Predictions: 'Date Night' and 'Clash of the Titans'

Date Night will try to push Clash of the Titans out of the #1 position at the box office. 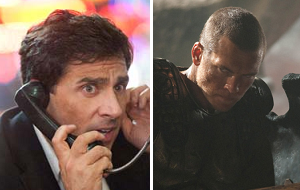 Thursday Afternoon Update (2:38 p.m. PT) As of 3 p.m. PT, Fandango.com is reporting that Date Night is responsible for a modest nine percent of daily ticket sales, while MovieTickets.com is reporting five percent. The 20th Century Fox release still looks poised for a #1 opening, but it may not perform as well as it was initially expected to.

Clash of the Titans leads daily sales on Fandango with 28 percent. The buzz surrounding the Warner Bros. release isn't exactly glowing, but it shouldn't suffer a catastrophic drop. On MovieTickets it is responsible for 24 percent.

How to Train Your Dragon boasts 27 percent of sales on MovieTickets, and 17 percent on Fandango. The Paramount release will hold up well during its third weekend in theaters.

Check our final top 10 predictions in the table below.

Wednesday Afternoon Update (4:38 p.m. PT): Date Night has the distinct advantage of being the only wide release from a major studio debuting this weekend. Yet the Steve Carell/Tina Fey vehicle will have plenty of competition in the form of Clash of the Titans, Tyler Perry's Why Did I Get Married Too? and How to Train Your Dragon.

Date Night's biggest strength is the fact that it stars two comedic talents at the height of their popularity. Steve Carell and Tina Fey have both gained loyal followings thanks to their presence of The Office and 30 Rock, respectively. They've also both used their small-screen success to leap into the world of film. Even though Carell starred in the complete dud that was Evan Almighty, he's been able to build a very stable movie career for himself based largely on the success of The 40-Year-Old Virgin and Get Smart. As for Fey, Baby Mama turned out to be a solid mid-level hit for Universal in April 2008. Put the two together, and you have a combination that moviegoers will trust.

The reviews for Date Night are mixed at best, but that shouldn't hurt such a broad comedy too much. Date Night is a no-brainer for, well, date night audiences. Plus, after a rush of 3D films, a traditional, high-concept romantic comedy may come as a welcome change of pace to a lot of patrons.

As of 3 p.m. PT, Date Night has yet to break into the top five daily sellers lists on Fandango.com and MovieTickets.com. While that's certainly not a reassuring sign, the comedy is bound to pop on Thursday as more moviegoers plan for the weekend.

"Both overall activity and direct searches for Date Night have increased pretty substantially in the past week," says Flixster spokesperson John Singh when discussing the kind of activity the popular Web site is experiencing. "Based on Flixster activity, the audience demographic is skewing mostly toward under-25 females."

Expect Date Night to post a debut haul of $33 million from 3,300 locations.

Clash of the Titans will look to hold on to as much of its audience as it can after grabbing an impressive $61.2 million last weekend. Negative buzz about the film's 3D conversion and a general lack of truly enthusiastic reviews did not stop moviegoers from giving Titans the best unadjusted Easter Weekend opening of all time. Yet while negative buzz may not always kill an opening weekend, it can hurt a films legs. Like most blockbusters these days, Titans seems poised for a steep decline during its sophomore frame.

Expect Clash of the Titans to add $29 million this weekend, which will easily put it past the $100 million plateau domestically.

Tyler Perry's films tend to be quite front-loaded, which means that Why Did I Get Married Too? will likely fall at least 55 percent this weekend. That will leave the Lionsgate release with around $13 million during its second weekend in theaters.

Look for How to Train Your Dragon to hold up well thanks to positive buzz and the fact that it's still a more viable option for family audiences than Date Night and Clash of the Titans. Dragon should earn another $21.5 million during its third weekend in theaters.

Also coming to theaters this weekend is Letters to God, which Vivendi will open at around 900 locations. Look for the religious flick to post a modest $1.8 million debut.