Avatar posted strong numbers for the sixth weekend in a row, while also setting a new record.

Monday Afternoon Update (2:40 p.m. PT): Avatar's actual weekend gross came in below the estimated $36 million. Legion also fell a bit from where estimates had placed it. 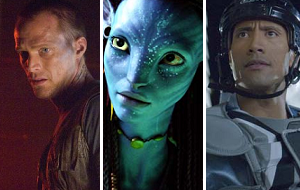 Legion debuted to $18.2 million, while The Tooth Fairy grabbed $14.5 million.

Saturday Morning Update (8:29 a.m. PT): Both Legion and The Tooth Fairy won't even come close to topping Avatar this weekend. The 20th Century Fox release will soon pass The Dark Knight as the #2 highest grossing film of all time (unadjusted).

Wednesday Afternoon Update (5:14 p.m. PT):Legion, The Tooth Fairy and Extraordinary Measures are going to be gunning for the top spot that Avatar has occupied for five weekends in a row. They better not get their hopes up, because Avatar is pretty much guaranteed to spend a sixth weekend at #1.

"This weekend may bring a sense of déjà vu at the box office, based on Flixster activity," says John Singh, a spokesperson for the Web site. "Two of this weekend's openers look remarkably similar to last week's wide releases. Extraordinary Measures has traffic that's almost identical to The Lovely Bones though interest from male audiences is significantly higher, particularly over-25 males. The Tooth Fairy is seeing Flixster activity that's very, very similar to last week's The Spy Next Door, though Tooth Fairy has higher want-to-see rates among under-25 females, which could give it an edge."

Singh also reports that Legion is seeing the most activity out of all three new films.

Meanwhile, Avatar is still 25 percent ahead of its nearest competitor in terms of activity on Flixster. James Cameron's sci-fi extravaganza is showing staying power that is extremely rare for even the strongest of blockbusters. This weekend, it will pass The Dark Knight in order to take over the #2 spot on the unadjusted all-time domestic gross list. The next record it's chasing will be the biggest yet: passing Titanic's $1.84 billion unadjusted worldwide cume.

The 20th Century Fox release is still dominating the world of online sales. As of 4 p.m. PT, Fandango.com is reporting that Avatar is responsible for 68 percent of daily sales.

Expect Avatar to post an impressive $36 million during its sixth frame, which is an amount that most movies would kill for during their opening weekend.

Out of all the newcomers, The Tooth Fairy will probably perform the best. Dwayne Johnson has shown some serious drawing power in films aimed at families. The Game Plan posted a $23 million opening weekend in September 2007, and Race to Witch Mountain opened to $24.4 million in March 2009. Those two projects benefited from the built-in trust that parents have for Disney releases, so it will be interesting to see how Johnson's family fare performs under the 20th Century Fox umbrella.

As of 4 p.m. PT, Fandango.com is reporting that The Tooth Fairy is responsible for a modest three percent of daily sales. That number should experience a boost as more families begin to plan for the weekend on Thursday.

Look for The Tooth Fairy to debut at around $16.5 million from around 3,000 locations.

Screen Gems is probably hoping that Legion will tap into the same audience that showed up for The Book of Eli last weekend. Both films are apocalyptic thrillers with heavy religious elements. However, Legion leads Paul Bettany and Dennis Quaid don't have nearly the same amount of drawing power as Eli's Denzel Washington, so it will have to settle for only a fraction of Eli's following. Legion will also be hurt by the fact that Eli started off with more than $38 million during the four-day weekend, which means that it could still bring in as much as $17 million during its sophomore frame.

Expect Legion to post a respectable debut haul of $14 million from approximately 2,400 locations.

Extraordinary Measures is trying to tap into the same crowd that devoured the inspirational feelings conveyed by The Blind Side. CBS Films is putting a lot of marketing muscle behind Extraordinary Measures because it marks the beginning of a new slate of films that includes The Back-up Plan with Jennifer Lopez and Beastly with Vanessa Hudgens. As cynical as it sounds, it may be tough for audiences to look at a film about dying children without thinking that it will lapse into tired cliches. My Sister's Keeper dealt with similar themes last summer and despite boasting an all-star cast that included Cameron Diaz and Alec Baldwin it only grossed $49.2 million domestically during its theatrical run. It's also worth nothing that stars Harrison Ford and Brendan Fraser always do much better at the box office with action/adventure flicks than than they do with serious dramas.

Extraordinary Measures could debut to a modest $9.5 million from 2,450 locations.