UPDATED: Weekend Actuals: 'The Twilight Saga: New Moon' and 'The Blind Side'

The Twilight Saga: New Moon and The Blind Side dominated the Thanksgiving frame. 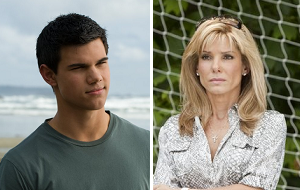 Monday Afternoon Update (2:42 p.m. PT): The race between New Moon and The Blind Side ended up being a lot closer than expected from Friday to Sunday. Click here for the full report.

Sunday Morning Update (9:49 a.m. PT): New Moon and The Blind Side were able to easily fend off newcomers. New Moon grabbed $66.0 million over the five-day holiday frame, while Blind Side tallied $57.53 million. Click here for the full report.

Saturday Morning Update (9:50 a.m. PT): The Blind Side is doing much better than expected this weekend, while New Moon is still posting strong numbers. Click here for the full report.

Friday Afternoon Update (1:10 p.m. PT): The Blind Side grossed an impressive $9.5 million on Thursday, which actually slightly outpaced The Twilight Saga: New Moon for #1 for the day. However, New Moon is still on pace to finish in first over both the three-day and five-day frames, though the race between the two films will be much closer than anyone was expecting. Click here to read the full story.

Thursday Morning Update (7:25 a.m. PT): Warner Bros. is reporting that The Blind Side was able to grab a healthy $7.9 million on Wednesday. Meanwhile, Ninja Assassin opened with $3.3 million.

Tuesday Afternoon Update: Moviegoers will have plenty to choose from over the Thanksgiving holiday. Even though a story about a girl who is torn between a wolf and a vampire will remain #1, a handful of new contenders should be able to carve out a respectable niche for themselves.

The Twilight Saga: New Moon totally shattered expectations when it opened to much fanfare last weekend. The franchise's fan base has grown considerably since the first film hit theaters last November, and New Moon will pass Twilight 's $191.5 million domestic haul by Friday. New Moon has had an overwhelming appeal among women in all major age groups, which means that it should hold up quite well during its sophomore frame since two major new releases— Old Dogs and Ninja Assassins —are aimed primarily at males. The fans are also loving the film. Flixster is reporting that there are more than 250,000 user ratings on the site and 86% are positive.

Expect New Moon to grab $83 million over the course of the five-day holiday, $54 million of which could come from Friday to Sunday.

The Blind Side will also fair very well during its sophomore frame. The drama has been exceeding expectations and word of mouth is overwhelmingly positive. Audiences will be in the mood for some feel-good material now that the holiday season is underway, and Blind Side certainly falls into the feel-good category. Flixster is reporting that 84% of reviews are positive.

Blind Side could tack on another $36 million in five days, $26 million of which could pile up from Friday to Sunday.

Disney is hoping that Old Dogs will be a repeat of Wild Hogs, another Walt Becker-directed comedy about middle-aged men. Wild Hogs took everyone by surprise in March 2007 by raking in $168.2 million. Old Dogs may have a tough time reaching that same mark during such a crowded time of the year.

The duo of John Travolta and Robin Williams won't have a tough time earning the trust of mainstream audiences. Meanwhile, Seth Green may help bring in younger moviegoers.

Old Dogs will be hurt by the fact that Blind Side is bound to scoop up the attention of adult patrons. Still, there should be plenty of room for both in the marketplace.

Expect Old Dogs to grab around $21 million from Friday to Sunday and $30 million during the holiday.

In addition to still having Blind Side in the mix, Warner Bros. will be opening Ninja Assassin. The action flick should perform well among males from 18-34 years old, since the likes of New Moon, Blind Side and Old Dogs won't have a strong appeal in that demographic. Even though Assassins isn't being pushed forward by major stars, audiences have shown this year that they are more than willing to take a chance on films without name actors (see Paranormal Activity ) or proven draws (see The Hangover ).

Ninja Assassin may manage $13 million from Friday to Sunday and $20 million over the course of the holiday frame.

Fantastic Mr. Fox has already managed a respectable $584,705 from four locations, and this weekend it will expand to a wide release. Even though director Wes Anderson has a quirky sensibility that won't be easily digested by mainstream audiences, the all-star voice cast led by George Clooney and the fact that Fox is based on a familiar literary property means that it should post solid numbers.

The Road is receiving a platform release at 88 locations this weekend. Even though it has received mixed reviews, The Road should manage a healthy location count based on the popularity of Cormac McCarthy's source novel and star Viggo Mortensen.

Disney is debuting The Princess and the Frog at two locations and it could grab $150,000-$175,000 from both. The traditionally animated flick expands wide on December 11.

We've included two prediction tables below. Please note the change in locations on the Friday to Sunday table for Old Dogs, Fantastic Mr. Fox and Precious: Based on the Novel "Push" by Sapphire.