UPDATED: Weekend Estimates: 'Cloudy with a Chance of Meatballs' and 'Jennifer's Body'

Cloudy with a Chance of Meatballs and Jennifer's Body have opened with mixed results during a crowded weekend. 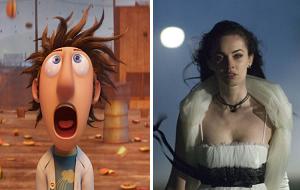 Saturday Morning Update (8:11 a.m. PT): As expected, Cloudy with a Chance of Meatballs will easily win the weekend. The Informant! is going to edge past Love Happens and Jennifer's Body. For the full report, click here .

Friday Morning Update (10:39 a.m. PT): As of 10 a.m. PT, Fandango.com is reporting that Cloudy with a Chance of Meatballs is responsible for 36 percent of daily sales. Meanwhile, The Informant! is beginning to make an impact with nine percent. Jennifer's Body and Love Happens boast four percent and three percent, respectively.

Thursday Afternoon Update (6:00 p.m. PT): Considering that the location count for Cloudy with a Chance of Meatballs is slightly higher than expected, the animated flick now has a stronger edge over the competition. With four new wide releases this weekend there's bound to be at least one film that underperforms. There is certainly no shortage of choices at the local multiplex.

"The normal September, pre-fall box-office ‘lull’ is definitely busier than normal this year,” says John Singh, a spokesperson for Flixster.

As of 6 p.m. PT, Fandango.com is reporting that Cloudy is responsible for 11 percent of daily sales.

Check out our final Top 10 predictions in the table below.


Wednesday Afternoon Update: This weekend, Cloudy with a Chance of Meatballs and Jennifer's Body will both try to edge Tyler Perry's I Can Do Bad All by Myself out of the top spot. Meanwhile, The Informant! and Love Happens should be able find a decent following among adult moviegoers.

It will certainly be interesting to see how Cloudy with a Chance of Meatballs performs considering that it's a 3D film that isn't being released by the usual animation juggernauts: Disney/Pixar and DreamWorks Animation. The Sony/Columbia project will see the widest unveiling of any new film this week at a total of at least 3,000 locations, and the wide reach will give the animated flick an advantage over the competition. Plus, family audiences will be happy to have a new choice at the local multiplex considering that the last few weekends have been dominated by films for adults.

As of 4 p.m. PT, Fandango.com reported that Cloudy was responsible for a solid nine percent of daily sales, which makes it the only release to appear in the ticketing site's top 5 at this point in the week. Cloudy 's percentage is sure to increase as the weekend draws near.

Expect Cloudy to win the weekend with around $22 million.

Jennifer's Body will test whether or not star Megan Fox will be able to take her Transformers success and turn it into genuine drawing power at box office. The young starlet has wisely been able to keep herself in the news recently thanks to her various disparaging comment about Transformers director Michael Bay. Whether or not she can carry a movie on her own is in question.

Unfortunately for Fox, critics are already chiming in about JB thanks to its premiere at the Toronto International Film Festival, and the word is not exactly glowing. B OXOFFICE's own Pam Grady wrote that, "It is not nearly as funny or clever as [screenwriter Diablo] Cody and [director] Karyn Kusama evidently think it is and it telegraphs its intentions too bluntly to be scary."

While a warm critical reception isn't very important for a campy horror film such as JB, positive reviews out of Toronto could have helped the film pick up buzz and finish ahead of Cloudy. As it stands now, JB should scare up a respectable $18 million during its debut frame.

Love Happens will benefit from the fact that star Jennifer Aniston is on something of a hot streak. Her last three wide releases— The Break-Up, Marley and Me and He's Just Not That Into You —have all been huge hits. Even though at 1,800 locations LH is the smallest of all the new wide releases, it will represent the perfect date movie for adult audiences who aren't enticed by the campy nature of Jennifer's Body. Expect the Universal release to grab around $12 million during its opening weekend.

As for The Informant!, Warner Bros. has a tough sell on their hands. While Matt Damon is at the height of his drawing power thanks to the Bourne trilogy, mainstream audiences may not quite get the tongue-in-cheek tone that Informant! director Steven Soderbergh is going for. While Soderbergh found box office success with Erin Brokovich, another film about one person trying to take down a corporation, Informant! isn't nearly as commercially accessible. Expect Informant! to rake in around $11 million from more than 2,400 locations.

With such a rush of new films this weekend, Tyler Perry's I Can Do Bad All by Myself should drop as much as 55%. Perry's films always suffer sharp second-weekend declines, and Bad All by Myself will be no different.

Check back tomorrow for our Top 10 predictions as well as official location counts.