Weekly Anticipation Index: '9,' 'Tyler Perry's I Can Do Bad All by Myself' and 'Sorority Row'

Tyler Perry's Madea character returns this September in Lionsgate's I Can Do Bad All by Myself. 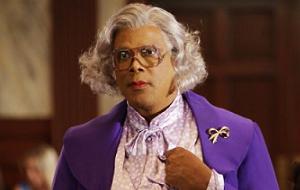 This week, we've added three new films to our Anticipation Index. 9 opens on September 9, while Tyler Perry's I Can Do Bad All by Myself and Sorority Row open on September 11.

Perry has managed to build quite a following for himself, and he's coming off the biggest box office success of his career. This past February, Madea Goes to Jail opened with an impressive $41 million before finishing its domestic theatrical run with $90.5 million. Luckily, I Can Do Bad All by Myself also features the Madea character, which means that Lionsgate can expect similar returns with Bad All by Myself.

Sorority Row represents yet another horror remake, although it obviously won't have the same built-it audience that recent reboots such as Friday the 13th and Halloween did. Row 's best asset is its young female cast, which includes Rumer Willis (daughter of Bruce Willis and Demi Moore) and Audrina Patridge ( The Hills ). Like most horror flicks, Row should be able to post solid opening weekend numbers before falling fast.

9 will benefit from the fact that Tim Burton's name is attached to it, and it should be able to entice moviegoers who are looking for an unconventional animated movie. While it may not open as high as Bad All by Myself and Row, 9 will probably show more staying power.