UPDATED: Weekend Predictions: 'Funny People, 'Aliens in the Attic' and 'The Collector'

Funny People, Aliens in the Attic and The Collector enter the summer frame this weekend. 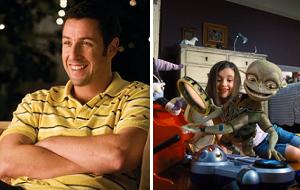 FP currently boasts a 69% approval rating on Rotten Tomatoes. The critical response to the film may not have a huge impact on this weekend's numbers considering that most of Adam Sandler's films are critic-proof. In fact, the ones that get the best reviews, such as Punch Drunk Love, Spanglish and Reign Over Me, tend to make considerably less money than the ones that receive a critical thrashing.

Harry Potter and the Half-Blood Prince is still #1 on both sites, with 36% of daily sales on MovieTickets.com and 31% on Fandango.com.

Check out our final Top 10 predictions in the table below.


Wednesday Afternoon Update (2:30 p.m. PT): This weekend, Funny People, Aliens in the Attic and The Collector will all try to make their mark at the box office. Meanwhile, G-Force and The Ugly Truth will try to maintain the momentum they gained from solid opening weekend grosses.

Funny People, which is set to open at around 3,000 locations, is by far the favorite to take over the top spot this weekend, the only question is by how much. Judd Apatow's third film as a writer/director is already carrying with it a reputation as being more serious than The 40-Year-Old Virgin and Knocked Up, which may hurt it slightly.

" Funny People is looking really strong with young males, who are going to drive the opening," says John Singh, a spokesperson for Flixster, an online movie community with 20 million unique users per month. "At Flixster, males under 25 are almost twice as likely as any other group to show interest in Funny People, which is also benefiting from strong early reviews."

Still, audiences have not responded well when FP stars Adam Sandler and Seth Rogen have delved into more dramatic territory. Sandler's serious performances in Punch Drunk Love and Reign Over Me won him critical praise, but both films failed to cross the $20 million mark domestically. 2004's Spanglish, a dramedy from James L. Brooks, finished with a mediocre $42 million. As for Rogen, he's coming off the dark comedy Observe and Report, which turned off mainstream audiences with its awkward tone. The Warner Bros. release grossed only $24 million domestically after opening this past April.

Luckily, Universal has wisely chosen to play up FP 's comedic moments more than the dramatic ones, which means that any audience backlash will come after the opening weekend. The R-rated flick has yet to impact sales on either Fandango.com or MovieTickets.com, which is not a surprise since it skews older and most moviegoers won't feel the need to avoid sold-out shows the way they did with Harry Potter and the Half-Blood Prince. FP 's online sales are sure to pick as we get closer to the weekend.

Whatever FP 's reputation is at this point, the presence of Sandler and Rogen is bound to be a winning one at least for the opening weekend. Expect a solid debut of around $31 million for Funny People.

Aiming for family audiences, 20th Century Fox is set to release Aliens in the Attic at around 3,100 locations. While the sci-fi elements of the story will appeal mostly to younger male audiences, the presence of High School Musical 's Ashley Tisdale is bound to entice female audiences as well. The film hasn't been given a very enthusiastic marketing blitz, and so far it hasn't made any impact on Fandango.com or MovieTickets.com. Aliens will have to compete with G-Force and Harry Potter and the Half-Blood Prince for the attention of young moviegoers, but it should still be able to muster an opening weekend haul of $9 million. Look for Aliens to win most of its following on home-viewing platforms.

Freestyle Releasing is sending out The Collector, a horror film from the writers of Saw IV, Saw V and the upcoming Saw VI, to around 1,500 locations. Television spots and theatrical trailers have been sparse for the thriller, which means that it won't benefit from a high level of awareness. A decent amount of horror junkies may still search out the film in theaters, which means that Collector could grab around $1.5 million this weekend. Much like Aliens, Collector will most likely find its audience on home-viewing platforms.

Among holdovers, G-Force may drop around 55%, and it certainly won't show nearly the same amount of staying power as Disney's UP did earlier this summer. The Ugly Truth will lose a decent amount of its audience to FP, while Orphan will drop fast like most horror flicks.

"Of last week's new releases, Flixster audiences responded best to The Ugly Truth, with 63% of users recommending it, slightly lower than the average wide release," says Singh. " Orphan had a positive response from 56% of users and G-Force was at 53%."

Check back tomorrow for our Top 10 predictions as well as official location counts.