Disney's G-Force appears to have dethroned Harry Potter and the Half-Blood Prince this weekend. 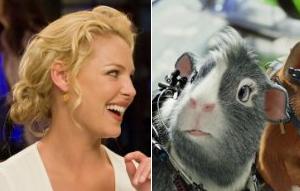 Friday Morning Update (9:29 a.m. PT): As of 8 a.m. PT, Fandango.com is reporting that G-Force has passed Harry Potter and the Half-Blood Prince in online ticket sales. G-Force represents 42% of sales, while Half-Blood Prince accounts for 30%. The Ugly Truth also experienced a surge, pushing it to 13%.

Thursday Afternoon Update (3:48 p.m. PT): As of 2 p.m. PT, MovieTickets.com reported that Harry Potter and the Half-Blood Prince was responsible for 50% of daily sales. G-Force ranked in second with 10% of sales, while The Ugly Truth held onto fourth place with a respectable 7%.

As of 9 a.m. PT, Fandango.com reported that Harry Potter and the Half-Blood Prince accounted for 52% of daily sales. G-Force grabbed second place with 13%, and The Ugly Truth represented 5%.

As expected, Half-Blood Prince should have no problem claiming the top spot at the box office during its sophomore frame.


Wednesday Afternoon Update (3:48 p.m. PT): This weekend, G-Force, The Ugly Truth and Orphan will try to topple the juggernaut that is Harry Potter and the Half-Blood Prince at the box office. They will need all the help they can get.

Half-Blood Prince 's domestic cume currently stands at an impressive $177 million. According to Rentrak, the sixth installment in the series has already reached a cumulative worldwide haul of $391.3 million. The Warner Bros. release should be able to post very solid numbers well into the month of August, a time that is usually reserved for less-than-stellar flicks. Half-Blood Prince should easily remain in first place this weekend with a sophomore haul of around $34 million.

" Harry Potter and the Half-Blood Prince remains very, very strong, and it's clear that audiences love what they're seeing," says John Singh, a spokesperson for Flixster. "It looks like it will be difficult for the weekend's newcomers to compete with it, though of the three, The Ugly Truth is looking the strongest with Flixster users, particularly among women."

Truth, which as of 2 p.m. PT represents a modest 2% of daily sales on MovieTickets.com, will serve as a box office test for both Katherine Heigl and Gerard Butler. The two thesps are well on their way to becoming bigger box office draws. Heigl has shown that she's more than capable of carrying a film on her own after the success of 27 Dresses last year. The 20th Century Fox release brought in an incredibly solid $77 million domestically. As for Butler, Truth could end up establishing him as viable leading man in romantic comedies, while he's also being groomed for action stardom in Liongate's Gamer, which is due in early September.

The fact that Truth is rated R may stop mothers from taking their teenage daughters to see the film, but it won't significantly dampen the film's box office prospects. Expect Truth, which will open at more than 2,700 locations, to bring in around $26 million this weekend.

Considering that it will appeal to family audiences, Disney's G-Force, which represents 3% of daily sales on MovieTickets.com as of 2 p.m. PT, will probably finish slightly ahead of Truth. The fact that the film is in 3D will help pad its box office haul thanks to the higher price of 3D tickets. If anything, G-Force will be hurt by the fact that Half-Blood Prince is being received so well. Younger children may beg their parents to take them to see the latest adventures of Harry Potter one more time before they decide to hang out with a bunch of guinea pigs working as secret agents. G-Force also won't have the same broad appeal that Disney's UP showed earlier this summer. The animated flick is set to land at around 3,200 locations and it could bring in around $28 million during it debut weekend.

Orphan, a Warner Bros. release, is set to open at more than 2,600 locations this weekend. The thriller has been given a solid marketing blitz, and it should be able to grab the attention of horror-loving moviegoers. Orphan should also help boost the box office clout of Vera Farmiga and Peter Sarsgaard, since they have both paid their dues thanks to strong lead performances in indie flicks as well as scene-stealing supporting turns in studio pictures. Expect Orphan to grab as much as $14 million during its debut frame.

Check back tomorrow for our full top 10 predictions as well as official location counts.