Brüno and I Love You, Beth Cooper will try to topple the Transformers 2 juggernaut this weekend. 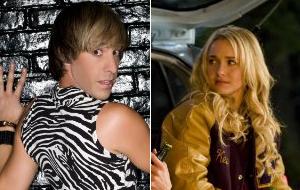 Thursday Afternoon Update (3:55 p.m. PT): As of 3 p.m. PT, Brüno is responsible for a respectable 29% of daily sales on Fandango.com, which still puts it behind Harry Potter and the Half-Blood Price with 49%. Interestingly enough, the ticketing site is reporting that from 2 p.m. to 3 p.m., Brüno was actually ahead of Half-Blood Prince with 40% to HP6 's 38%. Sacha Baron Cohen's comedy is certainly surging after a slow sales start during the middle of the week.

Check out our final top 10 predictions in the table below.


Thursday Morning Update (7:48 a.m. PT): As of 7 a.m. PT, Fandango.com is reporting a surge in ticket sales for Brüno. Sacha Baron Cohen's comedy is now responsible for 19% of sales on the ticketing site.

Wednesday Afternoon Update (7:33 p.m. PT): This weekend, Sacha Baron Cohen will try to repeat the success of Borat while director Chris Columbus, a former protege of John Hughes, will try to successfully return to his roots with the teen comedy I Love You, Beth Cooper. Both films won't have it easy considering that Transformers: Revenge of the Fallen and Ice Age: Dawn of the Dinosaurs are still going strong.

Universal is set to release Brüno at more than 2,900 locations, while Fox Atomic is sending Beth Cooper out to around 1,900 locations. Final location counts are due Thursday afternoon.

"This weekend’s two new movies are definitely split among gender lines—male audiences are leaning toward Brüno and females are preferring Beth Cooper," says John Singh, spokesperson for Flixster, an online movie community with 20 million unique users per month. "The big post-Fourth of July fireworks look like they’ll come next week with Harry Potter, and this weekend looks to be slightly sedate from a box office standpoint."

Universal's marketing blitz has been strong for Brüno. Everything from theatrical trailers to television spots have emphasized the fact that the film is from the same actor responsible for Borat, which was a $128.5 million domestic hit for 20th Century Fox back in 2006.

The controversy surrounding Brüno as well as the trust that Baron Cohen has earned should easily push the film past Transformers 2 and Ice Age 3. Expect the mocumentary to grab around $33 million during its debut frame.

Without the presence of any major stars, Beth Cooper will need to rely on word of mouth in order to become a major hit. The fact that it's opening at less than 2,000 locations will hinder it right out of the gate. Still, the PG-13 comedy should be able to grab a decent amount of teenage patrons who have already seen Transformers 2 a couple of times. Beth Cooper may earn around $7 million this weekend.

Even though it was ultimately topped by Transformers 2 last weekend, Ice Age 3 will probably finish in second place considering that the weekend's two new major releases are not the least bit family friendly. Transformers 2 will finish in a not-too-distant third place.