UPDATED: Weekend Predictions: 'Land of the Lost,' 'The Hangover' and 'UP'

Land of the Lost and The Hangover will both try to topple UP at the box office this weekend. 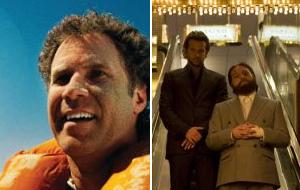 Friday Morning Update (9:07 a.m. PT) : According to MovieTickets.com, The Hangover sold twice as many tickets on Thursday as it did on Wednesday. The Warner Bros. comedy currently accounts for 35% of sales, while UP has posted 21%. Land of the Lost is far behind with only 9%.

While UP is coasting along on great word of mouth, and The Hangover has buzz to spare, it appears as though Lost is well on its way to becoming one of the biggest duds of the summer.

Thursday Morning Update (9:45 a.m. PT): As of 9 a.m. PT, Fandango.com is reporting that The Hangover has experienced a surge in interest and it currently represents 21% of daily sales. UP still leads with 47%, while Land of the Lost trails with a mediocre 6%.

Also not to be ignored is Harry Potter and the Half-Blood Price. Tickets for the July 15 release have already gone on sale, and the sixth installment in the popular franchise is already responsible for 6% of sales.

Check back throughout the day for more updates.

Wednesday Afternoon Updated: The Hangover and Land of the Lost will both attempt to kick off the month of June in grand fashion, while UP and a handful of other summer blockbusters will try to successfully maintain their audience.

Even though Hangover and Land of the Lost both have their strengths, it's likely that UP is going to repeat as the box office champion during its sophomore frame. Audiences are in agreement with critics for once, because the Disney/Pixar effort was the first film of 2009 to gain a coveted A+ rating from CinemaScore. Meanwhile, UP boasts a 79% positive approval rating on Flixster, an online movie community with 20 million users per month. Since word of mouth is decidedly glowing for a film that already plays well across many demographics, UP will most likely drop around 45% from its solid debut haul of $68.1 million. With that said, the 3D flick should easily bring in around $37 million this weekend.

As for second place, Land of the Lost and The Hangover may end up within a couple million dollars of each other and either film could finish second, making this one of the summer's most interesting box office battles.

"I think it's going to be a real close race, and I'm giving the edge to Hangover," says Larry Collins, vice president of film for Carmike Cinemas.

Collins stresses that while teenage audiences who normally would have been interested in a Will Ferrell comedy may not be enticed by Lost, the film is appealing to family audiences. Lost will be landing at more than 3,300 locations.

The two films are experiencing radically different critical reactions. While The Hangover —which will open at around 3,200 locations—is being viewed as a raunchy comedy done right, Lost is providing Ferrell with some of the worst reviews of his career. B OXOFFICE's John McCarthy wrote that, " Land of the Lost amounts to a $100 million bet that Will Ferrell’s brand of sketch comedy can survive contact with the day-glo sludge Sid & Marty Krofft purveyed. And vice versa. His shtick induces a few chuckles and the special effects and production design are worthy, but the two sensibilities never gel, rendering the movie not quite funny, strange or exciting enough."

If the negative word of mouth spreads quickly, Lost 's Saturday and Sunday numbers could suffer.

Neither flick has been responsible for more than 10% of daily ticket sales thus far on either Fandango.com or MovieTickets.com, but that is sure to change as we move closer to the weekend.

While both new releases should end up with grosses in the vicinity of $30 million, positive buzz may help propel Hangover in front of Lost. Expect Hangover to gross $32 million, and Lost to bring in $30 million.

This weekend will also see the release of My Life in Ruins, the new film from My Big Fat Greek Wedding 's Nia Vardalos. While Ruins may be able to carve out a nice niche for itself among females audiences who are uninterested in the shenanigans of Will Ferrell and The Hangover crew, it will be hindered by the fact that it's only opening at around 1,000 locations. Expect Ruins to bring in $3 million during its debut frame.

Check back tomorrow for our official top 10 predictions as well as final location counts.