Transformers: Revenge of the Fallen has a very real chance of becoming the summer's biggest hit. 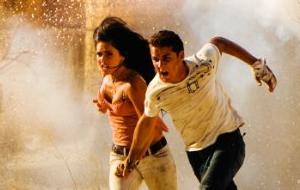 Continuing a summer full of sequels, Michael Bay's Transformers: Revenge of the Fallen will land in theatres on June 24. Considering that June is a relatively weak month full of films that could certainly be duds (see Imagine That, Land of the Lost and Year One ), the sci-fi action flick should make a huge impact.

2007's Transformers was a surprisingly big success. The film opened July 4th weekend, and it was able to grab a solid $70.5 million, which is relatively modest as far as summer blockbusters are concerned. However, after its opening weekend audiences really caught on to the film and it managed to end its domestic run with $319 million in the bank. Transformers topped Bay's Armageddon, which grossed $201.5 million in 2008 ($308.5 million when adjusted for inflation), as his strongest box office performer.

Revenge of the Fallen will also benefit from the fact that Public Enemies and Ice Age: Dawn of the Dinosaurs, which both open the following week, won't be competing for the exact same audience. As a period drama, Enemies will skew older than Revenge of the Fallen, and Dawn of the Dinosaurs will appeal to children who are too young for the PG-13 thrills of Bay's action extravaganza.

Two days after Revenge of the Fallen opens, Cameron Diaz will enter the summer movie season mix with My Sister's Keeper. Since it deals with such serious concepts as childhood illness and familial strife, Keeper really feels more like a fall release and that will hurt its box office prospects. Plus, the film will find Diaz outside of her rom-com comfort zone and that will also represent a gamble.