BOXOFFICE has placed a certain new sci-fi flick on its list of financial predictions for upcoming films. 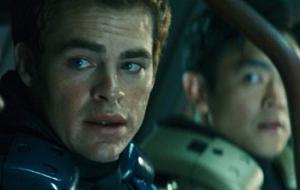 While it's obvious that Trek has a very powerful built-in fan base, it's a tricky film to predict box office grosses for. Much like Watchmen needed to reach audiences that hadn't read to the original graphic novel to become a major success (obviously, it fell short of that goal), Trek will need to develop some new fans in order to compete in the crowded summer season. The fact that it's being released on the heels of X-Men Origins: Wolverine also will not help its case.

Looking at the last two Trek films, 2002's Star Trek: Nemesis opened with a mediocre $18 million ($22.9 million when adjusted for inflation) before finishing with $43.1 million domestically ($52.6 million when adjusted for inflation). 1998's Star Trek: Insurrection brought in $22 million during its debut frame ($33 million adjusted) and a domestic cume of $70.2 ($107 million adjusted). Then again, those two films don't provide the strongest base of comparison considering that they represented a decline in popularity for the series.

A better comparison seems to be 2005's Batman Begins since it was also a rebooting of a series in decline. Christopher Nolan's initial take on the Caped Crusader grossed $48.7 million during its opening frame ($54.3 million adjusted) before showing some serious staying power and bringing in $205 million domestically ($230 when adjusted) before the end of its theatrical run. The moral of the story is that if Trek delivers an experience that truly revitalizes the series, then fans both old and new could end up seeing it more than once. In a competitive summer season, repeat business is incredibly important.

As of right now, we're predicting a $55 million opening weekend with a $130 million cume for Star Trek. Check out the rest of our predictions below.