Weekend Predictions: 'Race to Witch Mountain,' 'The Last House on the Left' and 'Miss March'

Some radically different new films will try to knock Watchmen out of the top spot at the box office this weekend. 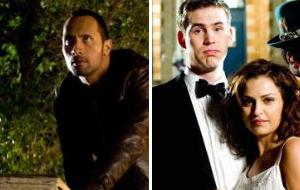 After posting a mediocre opening haul, Watchmen will have to defend its box office crown against three newcomers this weekend.

Disney's Race to Witch Mountain easily has the best shot at grabbing the top spot. The film represents another starring vehicle for Dwayne "The Rock" Johnson, who over the past several years has been successfully building up his box office clout. 2007's The Game Plan, which was also a Disney release, opened to nearly $23 million on its way to a $90.7 million domestic haul. Johnson's profile also received a boost from his supporting turn in last summer's Get Smart, which grossed $130.3 million domestically.

Considering that recently-released family films such as Coraline, Paul Blart: Mall Cop and Jonas Brothers: The 3D Concert Experience are trailing off, Witch Mountain will represent a viable new choice for incredibly profitable family audiences. Expect the Disney release to bring in as much as $27 million during its debut frame.

Universal will release The Last House on the Left at about 2,300 locations (final location counts will be released Thursday afternoon) this weekend. House on the Left comes on the heels of four major horror films in 2009, The Uninvited, The Unborn, My Bloody Valentine 3D and Friday the 13th. If audiences don't feel too overwhelmed by the recent rush of horror flicks, then House on the Left could easily bring in as much as $16 million this weekend.

After winning a Best Picture Oscar for Slumdog Millionaire, Fox Searchlight will be slumming it a little with the release of the R-rated comedy Miss March. March is receiving only a modest theatrical push with an opening of around 1,700 locations. Still, Fox Searchlight has given the film a relatively strong marketing blitz with an emphasis on television ads. Expect March to bring in around $6 million during its debut frame.

Now that die-hard fans have seen it, Watchmen will struggle to maintain its audience and it should fall at least 60% during its sophomore frame. With a $20 million haul this weekend, the superhero flick will reach a cumulative gross of around $90 million domestically. Warner Bros. has to be more than a little bummed that the film will only finish up with about $115-$120 million before it exits theatres.