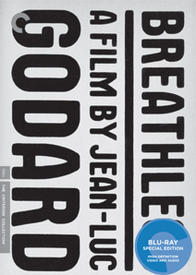 Though not as acerbically subversive or caustic of conventions as either Week End or 2 or 3 Things I Know About Her, Jean-Luc Godard's first feature, Breathless, is still imbued with a captious air in the way the critic-cum-director takes aim at the perfunctory formal concerns of the Hollywood films that directly inspired it. But whereas his works of the late 1960's took on an almost insolent quality - one that, as evident by the evolution that abounds in his oeuvre, can be attributed to his continuously compounding disenchantment with the world - it can be said that, by contrast, Breathless is more akin to a playful admonishment of the pictures, as Godard opines, initially instilled in him a love of cinema: the kind of films that it was no longer appropriate to make when he finally stepped behind a camera.

Now fifty years later, Breathless retains its chic essence through its self-aware antics and social cognizance. From Jean-Paul Belmondo's cinematically-obsessed cop killer Michel Poiccard to Jean Seberg's iconically-clad journalism student Patricia Franchini, those inhabiting the Breathless universe - including Parisian passersby who both gawk and gasp at the action befalling their beloved boulevards - are characterized by culture; their personalities products of what they've been directly exposed to. In this, a certain organic electricity is born, linking characters to both each other and environment. And while Poiccard's proclivity to prefer American movies is the most obvious example of this motif, the dialogue of the seemingly extraneous hotel sequence is equally telling of both his and Franchini's identities. Therein they converse about their likes and dislikes within artistic realms, make love, and wax nostalgic about their social expectations and the norms they've come accustom to. And while the details of their discussions can, at least ostensibly, read as equal parts trivial and tangential, the entirety of the scene, to me, reads as an expositional assay on temporal passage and the ever-undulating dynamic of interpersonal relations. It's a glimpse into reality, if you will - a tonal antithesis to the rest of the picture's fascination with movie mythos and moody ambiance.

And it's not long after the aforementioned scene that Godard literally rears his head. Having recognized Michel from his picture in the paper - a component of the film's ironically absurd dragnet that seems to succeed more in terms of scale than it does proficiency - Godard, a bystander, fingers Poiccard to some proximal policemen. And although this doesn't lead to an arrest, it does implore the viewer to consider the notion of directorial control and the importance thereof. Godard isn't merely taking the movie's reigns away from his protagonist but implying his omnipotence as to the picture's outcome. We, as viewers, are being asked to acknowledge the somewhat disarming examples of formal disobedience that the movie has carried to this point - the cadence of jump cuts and other examples of Godard's chaotic craftsmanship, the almost caricatural parallels to pictures of old, and the auteur's revisions to the language cinematic. In this, the soul of Breathless appears an innocent one. Free of the more corrosive commentary that his work would quickly come to accrue, Godard's debut is more celebratory than censuring despite its tongue-in-cheek buffoonery - a work as innovative as it is experiential and playful as it is powerful.

Though not nearly as robust as some of Criterion's other 1960's outputs - even fellow black and whites like Godard's Vivre sa vie or Fellini's 8 ½ - Breathless is well represented on the Blu-ray format and is certainly a visual elucidation of the other prints I've seen. By finding a balance between luminous Parisian exteriors and the city's comparatively dark café interiors, the image transfer exhibits ample detail without sacrificing contrast or compromising the picture's rather raucous aesthetic appeal. Grain levels appear to be fairly consistent and only appear anomalous during certain shot transfers, at which times they can feel heavier, more significant. On the whole, the visual representation is free of debris but never falls victim to the kind of overt digitalization or glossiness that the image correction process can sometimes accord. Sound too is crisp, though expectedly lacking the kind of aural dynamicism that the format is capable of.