Some guys just can't handle Vegas, at least according to director Todd Phillips. Phillips, who once won over the college-and-up crowd with Old School, reclaims his title as king-of-camaraderie with another tale of male bonding that's been smattered with fancy-free embellishment. Still, such success was surprising, to say the least. With a cast of relative unknowns and a candor that's almost begging to offend, The Hangover hardly looked poised to become the biggest R-rated comedy of all time. Upon its proverbial Last Call, the movie had nabbed a staggering $277.3 million and was featured on as many as 3,545 screens. Needless to say, a sequel (The Chaser, The Regret, The Phantom STD?) is to be expected. 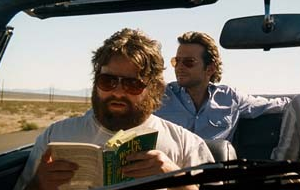 Best enjoyed with brews and buds, The Hangover is a fitting fusion of pop-culture and masculinity that takes a "nothing is sacred" approach in garnering laughs. Centered around four friends-each uniquely distanced from the responsibilities of adulthood-the movie reads aptly as quasi-obtainable escapism for men, especially those shackled by the bonds of reality. Though fantastic in terms of scale (nary have my own shenanigans involved a tiger), the antics of the quaternary are far from absurd given the personalities of the characters and the temptations of Vegas. Upon arriving in the desert city, the four-played by Bradley Cooper, Ed Helms, Zach Galifianakis, and Justin Bartha-quickly succumb to the locale's ability to "morally deafen" outsiders. Their remembrance of their trip goes like this: rooftop toast, [scene missing], wake up hung-over. Worse than the headache, dehydration, and terrible taste in their mouths (hey, as the movie suggests, we've all been there), the four are now three, for Doug (Bartha) has gone missing. Following this brief expository period, The Hangover becomes 2009's crassest detective story, as the now-triad looks to piece together the previous night based on a trail of clues they haphazardly stumble across.

Crafted for the male perspective, the movie's narrative is both clever and befitting. The gang learns of their night by way of search and assumption. They fear that the worst has happened and feign tact around those who may have information for them. As their quest for memory (and missing friend) unfolds, we the viewer take the journey with them, for we are only privy to what they can recollect. In this, the surprises that await the characters are equally affecting to viewers, as an emphasis is placed on both timing and spontaneity. Gags are revealed with circumspect reasoning, which allows jokes to be built up onto each other.

If anything, the film can fairly be called sexist, though it makes no apologies for its male-centric stance. Female characters are portrayed as critical and pesky-save an escort played by Heather Graham-who all but drive their men into hands of Lady Vegas. Nonetheless, the picture eventually eschews its quaky gimmickry and ends with a white wedding: the transitive symbol of adulthood. While the picture suggests that, in time, we all must grow up, it still relishes the memory of nights where nothing's remembered; the times when maturity was an afterthought and pleasure was a sole priority. Perhaps Phillips misses those nights or, perhaps in retrospect, warmly recalls the stupidity of them. Regardless, The Hangover follows the model of instant gratification and doesn't pull punches in the process. Provided life doesn't reflect art too closely, it shan't be forgotten anytime soon.