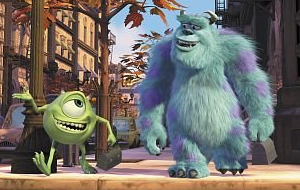 A release purported to compliment the whimsical UP, the new Monsters, Inc. Blu-ray edition (available in a four-disc combo pack) celebrates the premiere pairing of Peter Docter and Pixar-a partnership that is two-for-two as far as I'm concerned. Though less adult than Docter's latest project-spending more time on cutesy characterization than weight issues-Monsters is a phantasmal approach to childhood lore, one that matches innocence-inspired visuals with befitting humor. The story is a new take on an old fear. Influenced by the infamous "monsters in the closet" phobia, director Docter and company create a dimension that parallels our own, only inhabited by-as the title suggests-monsters. These creatures are not without typical strokes of Disney domestication but are captivating all the same.

Rather than beguile young audiences with the surely expansive inner-workings of Monster Society, the film focuses its attention on their energy plant and those working inside it. From observing this cultural crux we learn that they generate juice from the screams of kids, thus making the act of scaring human children an essential enterprise. Leading the charge is "top-scarer" James P. "Sully" Sullivan who, along with trainer Mike Wazowski-the two are voiced by John Goodman and Billy Crystal, respectively-hope to set a new all-time scare record. Their goal is admirable in its perpetuance. Still, the two don't view their job with the sanctimony that comes with preserving an entire race but instead perform out of civic duty and competitive spirit. Though Mike-a mere echo to Sully's roar-does have ambitions of fame, his blithe nature downplays any would-be disparaging traits. The presence of devilish monster Randall (Steve Buscemi), also makes Mike's shortcomings moot by comparison.

Because the continuance of their world is dependent upon scaring humans, the movie indulges in the dimensional gap between the monster's world and our own. They enter through closet doors-portals that can only be opened with an according key card and, naturally, electricity. Some astute observations are made along the way though the picture's hub is the relationship of Sully and Mike and how this dynamic shifts when a dramatic catalyst is thrown into the mix.

Enter Boo. A girl of about two, Boo-a name given to her by Sully who in turn calls him Kitty -finds herself on the wrong side of her closet door and begins wandering off within the monster realm. Being caring by nature, Sully and Mike find themselves her rescuers but encounter troubles (read: Randall) that propel the story into a sequence of chases and near-captures. In this, action is well composed with a noticeable premium on creativity. Docter takes advantage of the cross-world gap and pursuits seamlessly spill over from the monster dimension into ours, and vice versa. The animation of such scenes is rendered smooth and the Blu-ray transfer does well in capturing the prismatic coloration of human and creature alike. Tones are far from subtle but transfer smoothly-looking in no way gaudy. While backgrounds look apt enough, they're pretty much given a spit shine. The real benefit of Disney's BD treatment is in the textural nature of the characters themselves-Sully's fur, Mike's not-so-smooth underbelly, and Randall's scales all look pristine. When in movement, these details look natural and the corresponding light sources and shadowing dance well off such surfaces. Throughout it all, the audio track booms decidedly. From the roars of the monsters to the screams of children-and everything in between-the audial accompaniment is contrastingly punctuated and helps evoke mood as much as the lustrous imagery itself.

The entire package-which includes two Blu-ray discs, a DVD version, and a digital copy-is another knockout from Disney. Monsters is a film of both understanding and frolicking and these notions are now preserved exquisitely in this hi-def release.