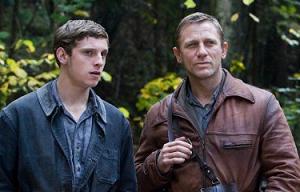 Selectively thoughtful, sporadically emotional, and obviously romanticized, Defiance is a film of moments, some work-well in fact-though ultimately the picture is too concerned with tiptoeing issues to be truly memorable. In short, its story is important but the movie itself is not. That aside, genre fans won't be disappointed, as the movie is a competent blend of well-crafted intensities and apt storytelling. An inopportune release date and low-exposure advertising kept Defiance to a $28.6 million domestic total on a peak of 1,793 screens. Defiance should perform better on home video formats, which affords the many that missed it during the award season rush an opportunity to see what the buzz is about.

Daniel Craig and Liev Schreiber play the brothers Bielski, proud Jews who seek refuge in Belarussian forests during WWII. As the pair flee into the wilderness they are without aim or purpose, but this changes as they encounter other Jews hiding from the Gestapo. Though their original intent was to merely retain their lives, their new goal is to live them, thereby harboring their humanity. A community is formed amongst the Jewish brethren, who band together for the benefit of their makeshift village and of each other. In this movement, director Edward Zwick exercises notions of socialism and how it's merely a theoretical practice, demonstrated by the camp's (and the brother's) eventual schism.

Viewers may find that many of the aforementioned "moments" in the film work, though I would chalk such adoration up to the visceral. Oftentimes I found that Zwick's intent was clear in terms of cinematic language but clumsy and awkward in practice-the parts being greater than the whole. Other times he eschews academia. Juxtaposed are two characters-a self-proclaimed intellectual and a rabbi-who serve to compare/contrast these differing life perspectives. An evocative movement indeed, but they are ultimately utilized to setup one-liners for Craig-insight be damned. Their relationship is later used as bait for emotional resonance, which cheapens their purpose; they aren't developed subtly enough for this to work.

Something I will say for the movie is that for each of its negatives there seems to be a positive ... or shades of one. The picture has ambition even if it fails to adequately convey the ideas its structure presents. In trying to stay true to the story while presenting broad themes, a dichotomy forms that gives the narrative an airy, unnatural feel. Still, the notions it looks to address are there-religion v. philosophy, loyal Germans v. corrupt Russians, the importance of fighters v. foragers-but in light strokes. Those who enjoy dramatic action movies would be at no risk renting or even buying the movie, though others, who prefer more considerate cinema, may want to look elsewhere.

As much as I hate the descriptor, the film is decidedly gritty in terms of aesthetic and tone and the photography of DP Eduardo Serra greatly enhances this directorial decision. The image is awash with a thick layer of grain; a bit of a surprise considering the movie was shot on Kodak Vision2 500T 5218 film, which is intended to have a relatively light grain structure. Naturally, the imagery on the screen-shadows, complexity of tree lines, deep fields of vision, and spatial exploration-could be the cause, though the image's incredible sharpness makes any concerns of digital noise minimal. Special effects blend well in the movie's master print and look consistent, uniform. Faces often become the focal point of shots and the BD transfer from Paramount exhibits a great array of detail in this department, allowing for the actors' grizzly expressions to look particularly life-like. Sounds are also complex and carefully mixed, making this an above average release, even for a newer film.