Before last fall, had I been asked what the most awkward actor-subject pairing would be, my response may very well have been Tom Cruise and Nazis. Hollywood, being what it is, one-upped my own imagination and delivered an eye-patched Tom Cruise ... and Nazis. My curiosities aside-and such a scenario presents many-Valkyrie has other draws-it's directed by "superhero movie extraordinaire" Bryan Singer (X-Men, Superman Returns) and previews made it out to be a tightly-paced action-thriller. Despite being plagued by several release changes, Valkyrie did manage to gross over $83 million domestically from a peak of 2,838 screens. 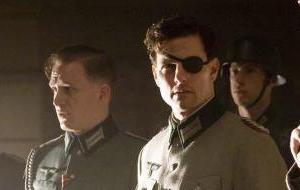 As I've mentioned before expectations can be a dangerous thing. Of course, expectation is a broad field and not always mutually exclusive to the viewer and whether or not they think they'll like a film. Before seeing the movie, I had pegged Valkyrie as an action film sprinkled with light commentary and maybe a solid performance or two. In this, the opening scenes didn't disappoint or, rather, surprise. After a clumsily placed German oath and a meaningless concession of language (Singer makes it clear from the start that main actors will not "sprechen sie deutsch" in his film) there's action abound. At least, that is, for one sequence in which Colonel Stauffenberg (Cruise) is injured. What comes next, now that is where surprise lies.

Though its tone is still dramatic and intense, maybe overtly so, the narrative decisively shifts both in direction and in mood. When first introduced to Stauffenberg (before he loses his eye, amongst other things), he's writing secretively in a journal that his oath is not to the führer and the regime but to Germany and humanity. Why he's writing this down, I do not know-methinks that is something a German officer wouldn't want documented. Still, his mission statement is a clear and simple one: to kill Adolf Hitler. Apparently Stauffenberg is not alone, in fact, there's quite an uprising growing amongst the German officers. The plan is not to just dispose of their dictator but to erase his name from their beloved country. "No longer shall it be ‘Hitler's Germany,'" they state. Obviously, they fail.

The film's premise brings about two main challenges, both of which Singer addresses poorly. The first is how to properly convey suspense in a film based on true stories, as the outcome is already a given. We know Hitler doesn't die at the hands of his own people or the allied troops. Because of this, the director must properly address where the suspense of his film should fall between the characters and the viewer. Singer being Singer makes the wrong decision and places too much emphasis on the latter. He treats this particular film, one of his thematically weightier projects, as if it were an intellectually humdrum X-Men flick. Characters (save Stauffenberg, duh) are underdeveloped, making it difficult to connect emotionally with them and their situation. I can't, nor do I want to, imagine the pressures associated with assassinating a world leader, let alone taking out one's own leader under his very nose. The stress must be huge, immense even. Instead of reveling in their private mental hells, Singer busies the audience by making them guess which character will meet what fate. He takes already superficial notions and projects them further away from any concerns of introversion or insight.

This rather absurd oversight also ties into the film's second "main problem" which is conveying the German people, namely Nazi soldiers, as actual human beings. This is an important notion as Hollywood oftentimes associates anything sporting a swastika as pure evil, no exceptions. Here, insight into the lives and personalities of Cruise's supporting players is of the essence but, again, ignored. The picture ultimately fails to even elevate itself above Singer's forays into the comic genre and instead becomes a disproportionate mishmash and a monolith to the unimportant.