After a brief period of what I'll call "silly-man stagnancy", Jim Carrey returns as, well, Jim Carrey in Yes Man. Largely a situational comedy, Carrey is forced to find a happy medium between the rubber-bodied comic from days past (think Ace Ventura) and the soft-spoken - dare I say - good actor of his more genuine movies (namely Eternal Sunshine of the Spotless Mind). Has he had similar roles before? Yes, but none possess the polarity of Carl Allen, his Yes Man moniker. The results disappoint. In the grand scheme of things, the film does too, though box office numbers indicate otherwise. While the public may not have greeted the picture with an emphatic, "Yes!" they, at the very least, gave this Carrey outing a, "Sure, why not?". In the end, the Warner Bros. release brought in $97.6 million domestically while peaking at 3,434 screens. 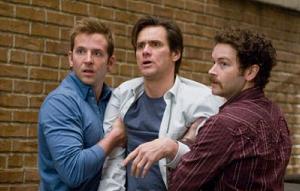 With a writing team comprised primarily of screenwriting rookies, it comes as no surprise that Yes Man plays more as sequences of setups and punch lines than anything of narrative interest. The plot evokes memories of another Carrey vehicle, Liar Liar, but instead focuses its intent on human choice rather than the consequence of magical birthday wishes. In this, Carl Allen becomes not a slave to his thoughts (as in Liar Liar where he is forced to act) but to his own naivety. The film opens with Carl, a lonesome loan officer, so grounded in self-pity and isolationism that he refuses almost every opportunity that comes his way. His life has become a cycle of self-sabotage, both professionally and socially, to the extent that even those nearest and dearest to him begin questioning their bond. And they should, as should we - the viewer. Carl is a jerk and, from what we're allowed to infer, with little reason. Inexcusably chalked up to a failed relationship (as generically interjected into the story as can be), he revels in his misery, attempting to drag others down to his level. The outside world meets his antagonism with annoyance and begins fazing him out. It's at this point he needs something, anything, to bring him back. That something is the word, "Yes".

After being coaxed into attending a cultish seminar on the power of "Yes," Carl decides to put this newfound ideology into practice by becoming the most agreeable man on the whole damned planet. The narrative lynchpin here is that he must truly believe that "Yes" leads to good and "No" leads to bad, a notion that's simplistic and silly. As Carl begins accepting every opportunity that presents itself (even when he's not asked to participate in them) we begin to see how cut-and-dry the story is. I imagine the writing team at work:

There's little creativity here, which is how the whole movie plays out. The scenarios Carl finds himself in fuel the story but don't demonstrate a cohesive narrative voice. What's left is a forgettable jumble of jokes that rest on the shoulders of Carrey and, because the film is relatively free of the absurd, he cannot explore these comedic notes farcically, which is his forte. We're left with little except a commonplace message on learning to properly weigh our decisions. Any instance where the film approaches the likes of a character study or a contemporary reflection (as in the more enjoyable Happy-Go-Lucky) it buries itself in genre convention and opts for more commonplace situational gags. This is where the movie is most comfortable - in setting up scenarios for Carrey to knock out of the ball park. Sadly, it can't even get this right. Most jokes miss and those that connect do so with little power. As much as I want to refrain from making a "Just say ‘no'" joke, I feel that I'm left with few alternatives. I suppose instead of tempting cleverness at the expense of cliché, I'll opt for a straightforward approach: don't buy this movie. Rent hesitantly.