The scariest thing about this movie is the fact that someone thought this was a good idea. Whether the decision to make the film was because of monetary reasons (probable) or because the story affords a certain creative flexibility, I do not know. The real answer is neither here nor there. Despite a massive advertising campaign, The Day the Earth Stood Still underperformed thanks to a poor critical reception and word of mouth. The Fox release ended up with a domestic haul of $79.4 million. After opening at 3,560 screens, TDtESS's location count only fell, and justly so. Still, it will likely perform well on DVD if only to satisfy viewers' curiosity. 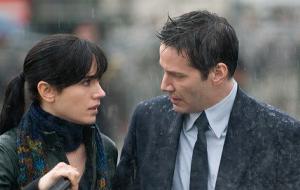 There's an old adage that goes: if you don't have anything nice to say, don't say anything at all. If I were to abide by this, my review would be wordless. A grating film from its opening shot, TDtESS possesses none of the tact or subtlety of the original, instead opting for special effects and half-baked, hyperbolist musings. To writer/director Scott Derrickson's credit (this is as nice as I'll get), he avoids the mistake of merely replicating the established classic and adds a period of tension and unease as the starship looms overhead. More than anything, these scenes act as a nod to technological advance, a motif Derrickson is happy to run with. While the 1951 version opened with the UFO's landing at the National Mall, its remake focuses on what leads up to this otherworldly encounter. This is all well and good and it preys on the immediacy we demand of our motion pictures these days, particularly of action films. That being said, Derrickson's delivery is careless and rushed and affords the film no favors.

Instead of establishing mood and giving a sense of the character's anxiety, TDtESS greets viewers with the filmic equivalent of a punch in the face. Promising moments are brushed aside to favor what is to come, namely a pointless display of CGI and grating philosophical notes. It's a shame that TDtESS doesn't work. The idea of how the human race would react, particularly politically, would be of worth if properly explored. The original does this, delving into ideologies of fear and cultural bridging while keeping its focus on people - how they interact and how they weigh circumstance. The Red Scare gave these themes even more firing power, which the picture utilized tastefully. The modern reimagining seems to lose or, rather, disregard this idea - focus is on spectacle and updating the story to match a more "contemporary" cinematic attitude.

I feel obliged to mention Keanu Reeves, as much has been made about this ever-wooden actor playing an alien. This seems like a match on paper but comes across as lazy onscreen, largely due to Reeves attempting to be overtly deadpan, almost to the point of self-parody. He, like the rest of the movie, fails. We, as the viewer, cringe.