Director Ridley Scott has been hit and miss as of late, and I mean that both in terms of the quality of his pictures and their success at the box office. After a string of disappointments - namely Kingdom of Heaven and A Good Year - Scott fired back with American Gangster, which performed fiscally and was well received by critics to boot. I hated it. Still, names like Washington and Crowe typically aren't ignored and that, combined with the deceptively grandiose scope of the project, left audiences hooked. That being said, big names don't always equate to big returns. Body of Lies only managed to gross a modest $39.3 million domestically and peaked at 2,714 screens. 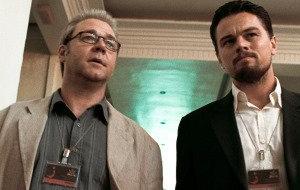 Set amidst our current situation(s) in the Middle East, Body of Lies fails to elevate itself above other genre pieces. Scott attempts to rectify this by drawing better acting from his cast but it's not enough. Don't get me wrong though, the performances are apt, particularly Russell Crowe's, even if his role doesn't challenge him as an actor. Mark Strong is, well, strong as the head of Jordanian intelligence. Leonardo DiCaprio is decidedly average, again not selling me on his insistent use of faux-accents. Nonetheless, the acting does aide the picture, though not enough. A counterweight to it exists in the form of half-baked notions on terrorism. It's a case where, if art imitates life, then Scott must see life as incredibly simple.

There has been much ado lately about exploring acts of terror and the mindset of those involved. Body of Lies deals with those on the frontline, not of combat, but information. DiCaprio plays CIA operative Roger Ferris, one constantly seeking intelligence but somehow always ending up in the thick of things. The plot is branching and interweaving and I applaud Scott, and screenwriter William Monahan (The Departed) for not being overtly straightforward. Their illustrations concerning tensions between Ferris and his superior Ed Hoffman (Crowe) are interesting and present a dichotomy between logical and emotional response. Hoffman represents the former. He is portrayed as a family man, taking calls whilst performing token fatherly tasks, never being rattled by the unexpected. Ferris is rash and immediate. Being the man on the inside, he is at the mercy of those above him; their mistakes could mean his life. There is a sense of urgency in all he does and his knee-jerk reactions further complicate matters.

Where the movie ultimately fails is in how poorly it understands the gravity of the situations it depicts. Acts of terrorism and violence are abundant throughout the plot but their effects are ignored. Of course, focusing on the causes involved is a topic well worth exploring but it isn't effectively conveyed here. The dialogue examining our characters' mindsets are heavy handed and uninspired. Worse yet is how Scott trivializes the aftermath of public attacks, using them to drive the narrative instead of as something of relevance. Aesthetically it doesn't differ much from Scott's recent outputs; inventively, the man peaked 25 years ago. He still exhibits shades of capability but could benefit from channeling his former self.