Since its inception, the medium of animation has been best suited to exploring a more fantastic realm. It goes beyond the capabilities of film to this point, though technological progression constantly narrows that gap. Its biggest strength, characterization, remains untouched as human traits can be projected onto any object, making even the most unlikely objects relatable, personable. Due to their observably affectionate nature, animals are especially prone to receiving the animation treatment. Having personalities of their own, it becomes the artists' job to exploit these temperaments into something greater - something human. Audiences largely buy into this fascinating practice and such films are often coupled with box office success. The "family-friendly" element also helps. While Madagascar 2 failed to reach WALL-E or Kung Fu Panda status worldwide, it still performed respectively, grossing $179.8 million domestically, about 92% of its predecessor's total. It peaked at 4,065 screens. 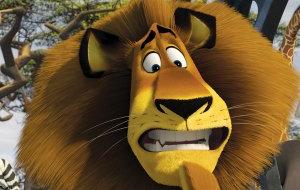 In Madagascar 2 we are once again introduced to our four main characters, a grouping of animals that populates a New York City zoo. Soon after our reintroduction to them, our lead, Alex the lion (Ben Stiller), and company (Chris Rock, David Schwimmer, and Jada Pinkett Smith) find themselves at an African watering hole - their first introduction to an all-animal society. Having been raised under human terms, their expectations and ideas concerning natural order are askew and they all must adopt accordingly. Of course, it is in this that the aforementioned characterization of animated players is made relevant. Each of the four creatures (a lion, giraffe, hippopotamus, and zebra) has been pampered by man's interference and they struggle to adapt to the wild. As expected, humanistic issues are juxtaposed to the animal kingdom, namely those of attraction, identity, and even race. I am not sure how appropriate some of these notions are for children but much of it is likely to go over their heads. Still, I can't help but mutter to myself when certain families of animals are associated so directly with specific ethnicities.

The humor of the film ranges greatly but is spaced in an almost haphazard sense. There is no rhythm to it. Clever puns are immediately be followed by overlong slapstick bits and running jokes seem sporadic and ill developed. There is also a particularly curious quip that directly references a sexual act. While, again, it will be beyond the comprehension of children I was surprised to find it here. The only consistent laughs come from the decidedly evil lion Makunga (Alec Baldwin). Instead of relying on gimmicky catch phrases, Baldwin makes this is own, using his wide-ranging wit to interject something fresh into an otherwise stale, formulaic story. All the actors involved do bring a bit of themselves to their role but too often it comes across as being entirely one-note. When examined as a whole, the movie resembles a group of individuals all trying to rush through an already crowded doorway at once; it does not work, at least not to the level intended.

My complaints aside, expect more from this franchise. With trilogies being all the rage these days, a third installment is already underway and slated for a 2012 release. For those seeking more from the supporting parties, a short DVD entitled The Penguins of Madagascar is available to accompany the feature film.