At this point in time, you have already heard the many theories as to what made Christopher Nolan's latest Batman installment the biggest film since Titanic. Chalking its success up to the untimely passing of Heath Ledger is an irresponsible move by some, but such speculation is not entirely misguided. The fact remains that people are a curious breed and have a tendency to buy into the stock of recent cultural and political phenomena. Nonetheless, it is not my responsibility to rehash speculation on how this tragedy and other influences impacted returns; a fiscal accomplishment this rare is deserving of a rather comprehensive dissertation, not passing comments. I will say that The Dark Knight is seemingly engineered for box office triumph and the rabid nature of its fans most diehard will undoubtedly make its venture onto the small screen record breaking as well.

The staggering nature of these figures communicates more than I ever could: $530.5 domestically, 4,366 screens at its height. 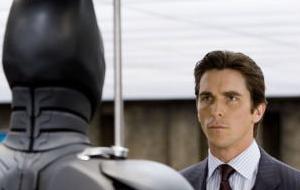 When Batman Begins was released in the summer of 2005, I began to lose faith in Christopher Nolan or, at the very least, question the direction in which his career was headed. After falling in love with the scrappy yet provocative Memento, it seemed his features drifted more and more in the direction of mainstream fare, a gradual but revealing process. Through all this, Nolan's ability to communicate tales remained, though his hints of intellectual intricacy were beginning to become smothered by spectacle of the simplest nature. The finer points of his stories still existed but no longer entirely added up. It was as if he became content wading through the pools of mediocrity in both a formal and thematic sense, leaving his pictures glossy yet light.

Still, the general population and critics alike responded in a big way to Begins and it garnered two cinematography nominations for Nolan's longtime DP Wally Pfister, neither of which was deserved. Framing and blocking were not among the film's strong points and many fight sequences in Begins are shot uncomfortably close to the action and the result is a disorienting blur of visual matte.

The reason for my citing Nolan's shortcomings lies in my admiration of his potential, potential that is tapped, though not fully, in The Dark Knight. Time has passed since the end of its predecessor and Gotham, a once fabled, tangential American city, now begins reflecting the complications we currently endure in the wake of 9/11. Vigilantes have come to roam the night in scattered droves, ethically commendable though irresponsibly unrealized. To them, Batman (Christian Bale) has become a symbol of hope. The question that remains to be seen is what exactly these every-men are hoping for. Many would immediately answer that their drive is fueled by the idea of a better Gotham but I counter that the ideologies of heroic acknowledgment and public responsibility are equally prevalent. In short, they no longer want to feel powerless against the city's criminals and they want the same individualized acclaim that Batman has received.

While the laymen fantasize about notions of glory, our hero struggles with the fruits of his actual labors. Bruce Wayne now begins to question his own motives, weighing his objectives v. results. Crime is still rampant in Gotham and his alter ego has become a scapegoat for the public; his media omnipresence and faux-authority demean police importance. Technically, he is as sanctioned as the mob itself, and the public begins to become wary of his overall effect.

The psychological crisis of a hero is not an entirely new notion though it is effectively utilized here, mostly thanks to the complimentary dualities of both Wayne and his counterpart - The Joker (Heath Ledger). Ledger excels as the chaotic, maniacal villain who serves as an antithetical mirror of Batman, at least in the realm of morality. It is not so much that he opposes the ideas that Wayne stands for but the practicality and application of them. He works under no discernible motive outside of, how Alfred Pennyworth (Michael Caine) puts it, "Just wanting to watch the world burn." As a whole, this take on Joker's mindset is a rather fitting one, though there is a bit more to him than that. Being the ying to Batman's yang, he is also a man of innumerable resources who lays his foundations outside of public light, allowing them to only see the consequences of his actions. While Wayne created the Batman persona to play off the fear in those he combats, Joker similarly manipulates the social apprehension of his targets: the people of Gotham. To him, Batman is not necessarily an enemy but a gift. The largely seen acts of public bravado only nourish him in his quest to show others their true self. He is largely apt in terms of breaking one's sense of self-worth, especially if it is an inflated one. Perhaps Pennyworth was right when he questions Wayne's own understanding after he states that, "Criminals aren't complicated."

Throughout the duration, Alfred aids Wayne with more rhetorical quips, not by expanding on the themes Nolan wishes to convey, but by merely suggesting them to both he and us, the viewer. I wish I could say that this director-audience relationship based upon Nolan allowing us to think and infer was continual but unfortunately the picture suffers a series of docile digressions. Many present moral or psychological dilemmas become overwrought in this sense. Genre fans will hardly mind this narrative speed bump while the arthouse crowd will likely feel their patience being tested. Part of this is naturally due to the limitations of the source material and the Nolan brothers' ambitious attempt to bridge it with current sociopolitical circumstances. For the most part their efforts shine but, as the movie wears on, some notions become trivialized, including the development of Harvey Dent into the villainous Two Face. It feels as if the Nolans were almost too ambitious in some regards, rushing too many ideas into an already crowded narrative. I fully respect their approach but feel that several worthwhile considerations are under explored. They still exist within the scope of the picture and that is commendable but perhaps such light strokes could have been made finer elsewhere.

For my money, this bonus disc disappoints in comparison to the film, its production levels, and the public interest in seeing just what went into making it. It should be known that I am referencing those features that can be found on the 2-disc standard definition edition so perhaps Blu-ray owners won't be as letdown. The menu for the second disc is as flashy as the film and gives one the initial impression that great care was put into making it but as one scrolls through the menu its clear the content is lackluster. There are two rather abbreviated, "making of" segments that deal with the original musical compositions and the technical advancements, respectively. Both features are interesting to a point and show the ideas that factored into the ultimate decisions but it could have been much more in depth. Perhaps those involved feared that some of the picture's magic would be lost it were overly explained but this logic would be rather sheepish. Fans will want more and they deserve it.

Sadly, the rest of the features are not nearly as insightful or inclusive, which is really saying something. The IMAX portions of the film can now be viewed individually but in standard-def, a little is lost here, even if they are shown in their intended aspect ratio. Aside from this, trailers, production stills and artwork can be viewed, which will, at the very least, provide fans with a few minutes of entertainment and maybe some computer wallpaper. Something is missing though and that something is Ledger. Sure, his image is there in the vain of The Joker but, with the buzz surrounding his performance and death, there is a noticeable absence here. Perhaps it was a bit too difficult for his colleagues to discuss such matters at the time but such a piece wouldn't be about exploitation but tribute. I know I'm not the only one who is going to conclude that a few stills in Joker makeup isn't nearly enough in this regard.